The Supreme Court’s decision to overturn Roe v. Wade takes us back to the Dark Ages 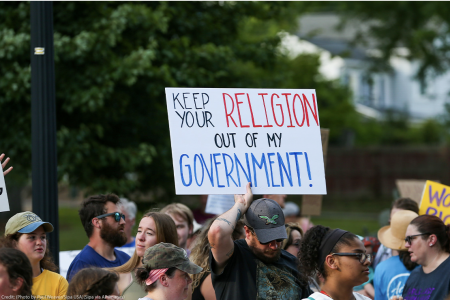 Last month’s Supreme Court decision to overturn Roe v. Wade—allowing states the option to legally ban abortion—was an abhorrent and unprecedented assault on women’s fundamental human rights and will unequivocally alter the landscape of women’s reproductive health, especially in states where they will most likely be denied the right to have an abortion and thus the right to control their own bodies.  To put it another way, this ruling simply paves the way for unprecedented state legislation to criminalize abortion.

Our [Raelian Movement] position on this ruling or any other that impedes human rights and our individual right to choose is crystal clear; we vehemently oppose such ruling not only because it’s an attack on women’s right to choose and on their freedom, but also because it undeniably takes us back to the Dark Ages!  But why?  Why would anybody want that, especially in the 21st century?

Be that as it may, this decision, won by a close 5-4 majority, is yet another example of a lopsided political dynamic in which most of the Supreme Court believes in conservative values (six Supreme Court Justices are Catholics.)  Yes, the justices on the Supreme Court are supposed to be neutral, and apolitical public servants but are they really?  We know they are nominated by partisanship, and many of their votes are leaning toward the conservative views of the people who appoint them.  So, don’t expect me to believe for a moment that religious convictions play no part in this.

Let’s talk about SCOTUS now.  These nine judges are not only given lifetime positions but they’re not held to any effing standard!  They should have absolutely no authority over our bodily choices and freedom of choice, period.  Yet, the decision to overturn Roe V. Wade showed us the extent to which this body (pun intended) is politicized and religiously biased.

As mentioned, with now six Supreme Court Justices who are Catholics, their decision, whether they will admit it or not, was highly influenced by their religious beliefs (aka inhibiting and condemning moral values.)  And by allowing states the option to legally ban abortion means that conservative state legislators across the country will also allow their deeply entrenched religious convictions to influence and dictate how they should vote on bills that affect individual rights because, let’s face it, everything in their eyes is about what’s morally right and we know their moral compass is already messed up, to begin with.

Believe you me when I say that the notion of separation of Church and State has never been so crucial.  And not only should it be unequivocally reinforced and become a golden rule in every layer of the U.S. government but, at a deeper level, there should also be a separation of Church and Sex, because this ruling isn’t just political, it’s also linked to deeply rooted religious convictions with the Catholic Church’s long history of controversies and aversion to issues related to human sexuality, sex education, and freedom of expression.

As we know, the Raelian Movement has worked tirelessly for decades to denounce the powerful, poisonous, and dangerous influence that the Catholic Church has over governments.  In fact, Rael is the only spiritual leader who has suggested that the Catholic Church be denied sovereign state status and be recognized as a criminal organization!  Thank you, dear Maitreya!

Lastly, in the big scheme of things this ruling is a clear reminder that absolutely nothing can be taken for granted in this country; neither our rights nor our freedoms.