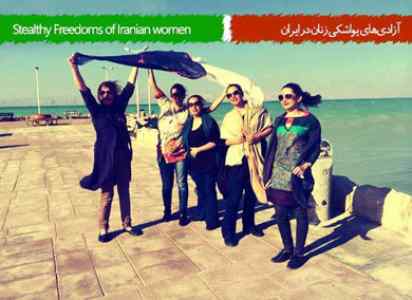 "Stealthy Freedoms of Iranian women,” is a new group created on Facebook, posting photos of brave Iranian women who have taken off their veils in public places for a little while. Sometimes they do this in natural surroundings, and sometimes they do it next to signs of warning about wearing the hijab. Some even do it next to the supreme leader's statue!
https://www.facebook.com/StealthyFreedom

Along with posting the photos, the women have also posted statements of their willingness to live in a free society and have freedom of choice about their own lifestyles.

"It is not easy at all to be called a whore just because you do not wear the hijab, and then even get beaten and be given a detention! It is not easy to have to experience all good feelings in secret.”

I know that not only is it not easy, but that it’s outrageous!

Reading that statement just took me back to six years ago, to the streets of Tehran, when I was beaten brutally and detained for a couple of hours and then had to appear in court, all for just wearing an overcoat to my knees that was considered too short. (Even though I had pants underneath!)

The International topless activist movement, Femen, has also supported this trend of taking off the hijab, pronouncing it a beautiful act of courage on its Facebook page while asking: "Now, can you still say that the veil is simply cultural?"

The answer is clearly, no, it's not, and it has never been! At least not for the majority in the big cities of Iran.

In 1979, after the Islamists won the game and robbed the revolution many people believed in, women protested on the streets after it became a national law for women to wear the hijab. These protesters were simply called "courtier whores" in the mainstream newspapers of the government.

So this is not a new story, but it has to stop anyhow!

Meanwhile, the former president of the U.S., Jimmy Carter, is taking part in the protest.

He is launching "a call to action” after traveling to more than 140 countries around the globe and finding so many violations of women's rights. Although most people around the world don’t know it, many such violations are happening in his own country, the United States, and he even mentions some experiences about female abuse in his own family.

He declares in his audio book, "A Call to Action; Women, Religion, Violence, and Power,” that the United States is 23rd among nations when in terms of honoring equal rights between men and women. This simply shows that, no matter what claims we make, humanity needs a vast revolution in consciousness to end all the primitiveness and barbarism. Religions are still playing a major role in keeping us back in the Dark Ages.

However, change is inevitable.

As a guide in one of the frontier movements seeking change, and as one who knows about the true possibility of shifting to the Golden Age phase of humanity and creating paradise on Earth, I fully and actively support any liberating activity in my country, and that country will hopefully soon be called Planet Earth!