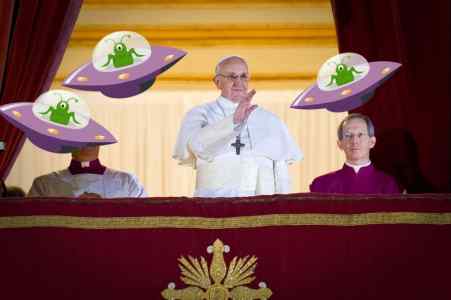 "There will be no need to baptize 'aliens' when they decide to come back” declared Rael, “they are the ones who created all religions on earth and who were mistakenly taken for gods. Instead of offering them to be baptized, he will have to acknowledge that they are the gods he has been praying to all along.”

The Raelian philosophy explains that all forms of life were created by human beings called Elohim coming from another planet who made us in their image. The original Bible clearly talks about 'Elohim' creating life on earth. This Hebrew word is plural and could be translated as 'those who came from the sky'. It has however been mistranslated into 'god' leading to the monotheist religions like the Catholic church.

By reading the original Bible without the monotheist filter, anyone can have access to the information that the Elohim wanted to have preserved to prepare their return. The evidence of their work on earth is everywhere and we are ourselves becoming creators as new forms of life are now being created or conceived in our laboratories. The arrogance of the pope willing to baptize those who sent Jesus is at the level of his ignorance.

Among the information given by the leader of the Elohim to Rael in 1973, which can be found in the book 'Intelligent Design” on www.rael.org, the leader Yahwe expresses his contempt about the Vatican's behavior:

“How dare they, these men who are only men, indulge themselves in the wealth and luxury of the Vatican when the Gospels tell them to possess neither gold nor silver, not even a spare coat?
Further he says : “How dare the Church burden people with their so called sins, which are only different concepts of morality and lifestyles; how dare they speak of goodness while living in opulence in the Vatican when people are dying of hunger; how dare they seek invitations and honors while preaching humility; how dare they ask people to call them “Father” , “your eminence”, “your holiness” when their Gospels expressly forbid all these things. If tomorrow the pope took to the road as a pauper, the church would be revived, but it would have a totally different humanitarian goal .... The Church could re-orientate itself towards goodness by helping those who are unhappy, by helping to spread the real truth of these writings which until now, have been distorted or kept secret”.
Search Raelianews
News Categories
Other News
‹ ›