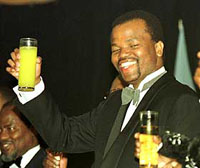 A recent BBC report criticized the king of Swaziland's lavish style of celebration, saying, "One of the world's last remaining monarchs, King Mswati III of Swaziland, has held lavish celebrations to mark his 40th birthday and 40 years of independence from Britain."

Upon hearing the negative report, Rael sent his support and congratulations to His Majesty, King Mswati.
He had this to say about Mswati's critics:

"They're showing themselves to be the same neo-colonialist critics of African leaders who remain silent while much larger amounts of money are given to other leaders -- for example, to the Queen and the rest of the British royal family --- when there are thousands of homeless people in the United Kingdom."
Rael added, "Of course, a black king is someone to be ridiculed just because he is black, while a white queen is a matter of respect. This is the double standard at its worst."

Mswati has been attacked in the media for celebrating when poverty, AIDS and other woes are widespread in his country, with critics saying money could have been better spent elsewhere, especially for education, health and saving lives.

"I think the nation can celebrate the achievements of the past 40 years," said Percy Simeline, a UK government spokesman.

"The [Western] press reports about Swaziland and its king are quite unfair," said Ditalamane Hebie, a Raelian bishop and agricultural economist teaching at the University of Burkina Faso. "It's as if celebrations shouldn't be permitted in Africa, even for a head of state or a king. But one can visit this kingdom and see that the level of social and economic infrastructure in Swaziland's rural areas is better by far than those in any of the African countries in which the political regimes have kept up ties with their former colonial powers.”

Hebie added,“The press is deliberately portraying this kingdom [Swaziland] in a negative way. "But it's actually an example and guardian of authentic African culture and tradition."

Eric Bolou, a Raelian guide of African origins living in London, agreed that Western criticism of Mswati is unjustified, and hypocritical as well.

“The Queen of England's Golden Jubilee commemorating her 50 year-reign was celebrated in luxurious style for months in 2002 in all the Commonwealth countries, even while a growing poverty was noticeable in England, Kenya, Uganda and Sierra Leone - to mention just a few places," Bolus said. "Yet no one dared to make a negative comment then.”

He said the Western world takes any opportunity to determine and control the way African countries are led.
"Critics are even suggesting a state-led democracy to replace the monarchy, but what do we have in England -- a monarchy!" he said. "This is yet another double standard."
Rael has stated in his speeches that he favors the creation of a new Kama (the traditional name for pre-colonial Africa), saying,"Traditional leaders are the engines of the African political revolution."

He has urged Africans to "take your destiny into your own hands by rejecting altogether the structure that has been imposed on you by force, whether political, religious or cultural." Rael has also called all Africans to launch "a true decolonization, consisting of putting Africa back to the state it was in before being polluted politically by colonization."