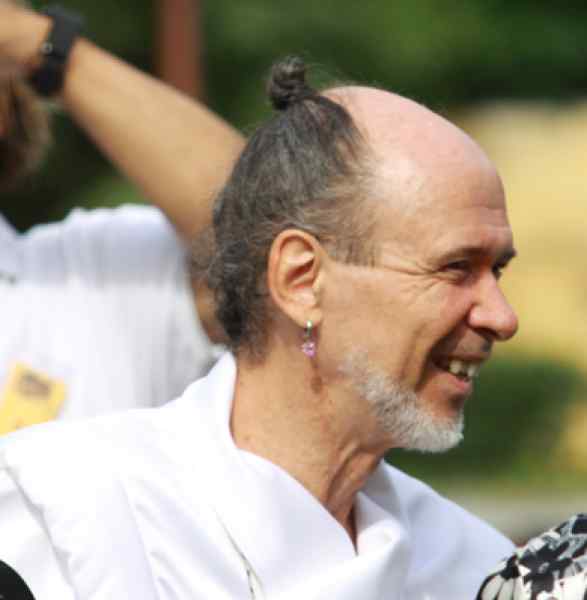 «Remember to always focus on the front left side of your brain, where the happiness centre lies. Every time you are happy, more blood comes here. At the same time, each time you send blood here through meditation, you are happier. So you can create happiness by feeling this part more than the rest of your body. Feel it. Feel this part becoming hotter, like a little fire inside. Happiness centre. And you will have a beautiful life. Never stop feeling it…»

In other words, just as several therapeutic visualization exercises that invite the subject to visualize the healing of a specific organ, or the scarring of a wound, or the strengthening of the immune system, Maitreya Rael invites the meditation practitioner to intentionally stimulate the blood flow in the left prefrontal region of the brain in order to increase the level of happiness that it generates.

To our knowledge, no scientific research has shown it was possible to target the left prefrontal cortex and intentionally stimulate the blood flow in that area.

Daniel Chabot, a Raelian Guide, MA, in charge of teaching in the Raelian Movement Structure, decided to explore that possibility. To do so, he used a device marketed by the company Thought Technology: the TT-pIR and Procomp Infinity Device. Thought Technology's latest innovation provides easy measurement of forehead infrared temperature emissions. The headgear incorporates two very sensitive and highly accurate passive infrared sensors 3.8cm apart and mounted on a headset to provide responsive monitoring and training of heat radiated from the forehead, i.e., the prefrontal lobes of the brain.
What makes this technology interesting is that it is possible, through neurofeedback, to measure and even train the prefrontal region of the brain without worrying about background noise from muscle contractions or even blinking, which can affect the electroencephalogram (EEG) and make the recording of electrical activities in this important region of the brain difficult, to the point of skewing the results.

This Figure shows the difference in heat in his left and right prefrontal cortex during a 30-minute meditation, with eyes opened. In the very beginning, we see that the heat was higher in the right prefrontal region than in the left. But quickly, the heat in the left prefrontal region gradually increased throughout the exercise and surpassed the heat in the right. According to Daniel, the sensations of inner well being were very powerful. In fact, the meditation exercise consisted in generating a state of great inner well being, while visualizing the blood flow in the left prefrontal area. “With my eyes opened, I could simultaneously use the visual feedback from the graphs in order to stimulate the progression.” says Daniel.
“While examining my results, I remembered Maitreya Raël’s teachings about how meditation, happiness, and awakening are states of mind. “We cannot do happy, we cannot know happy, we cannot have happy. We can only BE happy because happiness is a state of mind and not something we can own, do or know,” as Maitreya Rael said and taught us for years. And the evidence of this was unfolding before my very eyes. When I would see myself “do” rather than “be,” nothing would be working.”

To learn more about the happiness teachings of Maitreya Rael, you may attend his one week Happiness Academies. The next one starts next week, on April 28th, in Okinawa, Japan. To find the nearest Happiness Academy for you, please go to www.rael.org/seminars.
See you there...?