Where is the Israeli Gandhi?

Only love and sharing can save the World 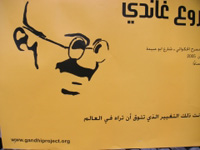 Only love and sharing can save the world. Where is the Israeli Gandhi?
1.5 million people are dying in the Palestinian territories... Will Israel let the rest of the world save the survivors when half will be dead ? This would fuse a huge worldwide anti-Semitism wave. If Israel is the one saving the Palestinians, providing them with food, water, medicine, and electricity before the rest of the world intervenes, then everybody will applaud and respect Jewish people.
The creation of the state of Israel is the cause of the Palestinian drama, and even if Israel has the right to exist, it has also the obligation to avoid a Palestinian genocide by providing help and saving a starving population. As an immediate neighbor and an historic cause of the problem, it has the responsibility to act humanely.
Can a country with an annual income per capita of $20 000 accept to have an immediate neighbor having only an annual income per capita of $700 without doing anything, especially when it is responsible of the problem? Would any European nation or even the United States tolerate to have a country like that at its border without intervening? The whole world is watching Israel and it's time for this nation to show them that the Chosen People is humane and capable of love and compassion.
Instead of tanks it should be trucks full of food and water, and connecting the Palestinian electric and water grid to the Israeli supplies. A Jewish Gandhi is needed who would make the whole of humanity respect the Jewish people for a long time.
This is another message from the Mashiah Rael to the people of isRael.