To increase the world's population is a crime against Humanity

the new trend in Japanese population is great 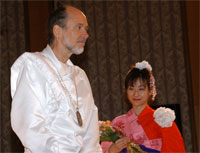 A recent census in Japan showed that the country has a greater proportion of older people than anywhere else on the planet - almost 27 million of them while the ratio of children under 15 is also lower than anywhere else in the world. Also three out of five women in their late twenties are unmarried, and a third of those in their early thirties. The Japanese government is now looking at incentives for people to have more children, providing matchmaking services, better child care, and encouraging fathers to take paternity leave.

Here is what the Prophet Rael declared after learning about these numbers:
The decrease in child birth is a wonderful trend to reduce the world's population. All "nationalist" politicians with shortsighted view trying to have incentives for couple to have more children are committing a crime against humanity as the world's population should be reduced. And of course in this process the percentage of old people will increase which is absolutely normal and very good for the future as the Earth resources and energy can only sustain a certain number of people.