The dumbest evolutionist "scientific study" of the year. 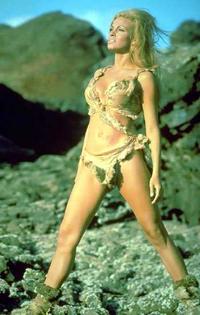 A recent study conducted by Peter Frost, a Canadian anthropologist, was published this week under the aegis of St Andrews University in Fife in the academic journal, Evolution and Human Behaviour.
What he basically says is that women with blond hair appeared by accident following a mutation and won cavemen's hearts and survived better than the brunette when there was a shortage of male. He concluded that the lighter shades of blond hair evolved as a response to food shortages in areas where women could not collect food for themselves and were reliant on the male hunters.
Another study published last year by researchers at City University in London found that modern men responded more positively to pictures of brunettes and redheaded women than to their blonde counterparts. Experts are now saying that as relations between men and women have evolved, men may have become “more attracted by brains, represented in their psyche by brunettes, than the more physical charms of blond hair”.
Are we really talking about science here?

In other words, to explain the facts that there is a diversity of hair colors in Northern Europe, and comply with the evolution theory, scientists had to make the following non-verifiable assumptions:

The whole evolution theory is built in the same way, making use of convenient assumptions that help scientists keep on writing thousands of pages of possible interpretations of their observations without having to question the validity of the theory in itself.
The Prophet Rael reading this piece of news made the following statement:
This is the dumbest evolutionist "scientific study" this year, claiming that primitive women suddenly thought "yes let's have blond daughters in order to attract men" and that they had the power to influence their children's hair color ... Very scientific indeed! These people forget that at this time, especially if there was a "shortage of men", like in many other cultures, there was polygamy, which is a good and simple natural way for all women to have partners. And that it was even better than polygamy as at this time marriage didn't exist... And there were communities where every member of the tribe was taking care of all members as it still exists in some primitive tribes where all children are raised collectively. It does also exist in animals, like ostriches and many others. May be this "scientific study" was made by "blonde scientists " ? ;-)