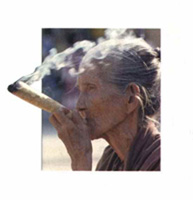 The Raelian Movement and its leader the Prophet RAEL are offering their support to the Britain's "cannabis gran", Mrs Tabram who eats marijuana five times a day - and keeps on doing it despite the threat of a jail term.

The old age pensioner is taking cannabis to combat intense pain in her neck and back, as well as other ailments such as tinnitus. Mrs Tabram is currently on bail awaiting sentencing after last month admitting possessing cannabis with intent to supply.

While the raelian philosophy asks its members to not use any drug, it strongly supports the use of herbs for ailment treatments.

RAEL declares: No plants created by Elohim*, that help us cure diseases, should be illegal. The cultural demonization of some plants must stop. In some countries like France, alcohol is politically correct while Marijuana is not and in Arabic countries it's the opposite. Stopping drug or alcohol addiction by education and helping people to have a happy life without these drugs is good, especially by destroying guilt or fears spread by bad traditional religious education , but the freedom of people to use plants as they wish must be respected.

*Elohim : Creators of all life on earth, see www.rael.org