Western media are still debatring on THE London bombing 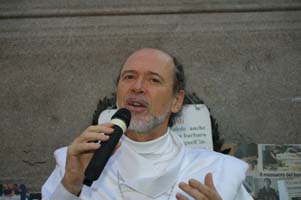 Ninety-nine people have been killed and more than 180 injured in a fresh wave of suicide bombings in Iraq, including a fuel tanker attack south of Baghdad....
Here is a statement of the Prophet RAEL, founder and leader of the International Raelian Movement, and founder of CLONAID, the first human cloning company, who just opened today the one week seminar that is held in Canada every Summer.

" The racism of the West is very clear in the Western Medias 55 people dead in London still make the Headlines of most of them, but 50 % more victims in Baghdad bombing get a lot less coverage,
CNN is still headlining "After THE bombing" talking only about London drama. As if Iraqi victims were much less important than those in UK. If a bomb kills 55 people in London all the Western media give it hours and pages of coverage but if a bomb in any middle east nation kills 10 times more, it will be much less covered, reported and debated. Most of pro Bush and pro Blair people see Iraqi bombing victims almost as an "acceptable drama" , but if a bombing happens inside US or UK it is viewed as totally unacceptable. As if the lives of occidental people were much more precious.This is pure racism, and will create much more resentment toward Western countries which will also create more terrorism. Only love can fix the problem. As well as having all Western militaries leaving Middle Eastern countries and ceasing this illegal occupation.