Euthanasia: People's choice is not respected 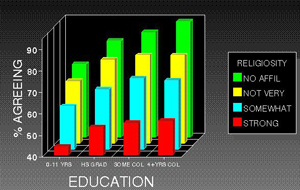 A recent poll by The British Social Attitudes report which surveyed 3,000 people shows that eight out of ten of people support a law change to allow doctors to actively end the lives of terminally ill patients who want to die. It also says that 60% support doctors prescribing, but not administering, drugs someone could use to end their own life.
However for the past ten years and again last May, a bill which would allow terminally ill people to be helped to die was blocked by the House of Lords. The opinion of the people is just not respected.
The report states: "In certain respects the current law that prohibits assisted dying seems to be at odds with public opinion.
Rael made the following comments today:
“Wonderful! If democracy means something we have to listen to the people! Whatever the conservative churches say... it’s so good to see that almost nobody listens to them anymore. And that applies not only to euthanasia, but also to contraception, abortion, divorce, etc... So why are the media giving so much room to what the pope and other conservative religious leaders say?
The answer is: propaganda by media owners who are conservative and try to influence people...Why is it also that the same media do not publish the opinion of the huge majority who is not listening to these dinosaur "spiritual leaders", who look more and more like primitive sorcerers or shamans compare to what the vast majority of people really want and do. One more time the Internet is the only solution to this media brainwashing...

You should cancel all your subscriptions to traditional media and write to them, telling them why you do so... they can either adopt a modern and progressive position and survive or become bankrupt as nobody wants to ear about the Christian "ethicists" condemning and criticizing the People way of life anymore, when 80 % of the people support euthanasia, 90 % support contraception, 90 % support the right to divorce, 70 % support the right to abortion, etc... But when traditional media talk about these subjects, they still give less than 50 % of the segment talking about these new values and more than 50 % to conservative Christian ethicists opposing or criticizing the people's choice! Talking about manipulation... If the media were impartial, and had respect for the People's choice and way of life, they would, as an example about euthanasia, give 80 % of the article content to supporters of euthanasia and 20 % only to opponents, but this is never the case...