If stolen jewels are not returned immediately 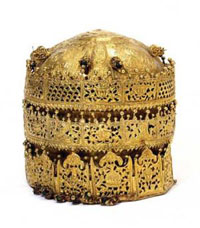 The president of Ethiopia, Girma Wolde-Giorgis, has personally intervened in a dispute between Ethiopia and British Museums, demanding they return $millions in valuable and very historic artifacts which were looted from Ethiopia in 1868 by British soldiers. Among these are some of Ethiopia’s most significant religious treasures which even the British Museums have agreed not to display, jewels of all sorts, and even the Ethiopian royal crown.

According to history, “British soldiers slaughtered hundreds of poorly armed Ethiopians after the battle, and then ‘jostled each other’ to grab a piece of the emperor's blood-stained shirt, which they tore from his body. They also looted the citadel and a nearby church, carrying off treasures that included ‘an infinite variety of gold, and silver and brass crosses’, as well as ‘heaps of parchment which was royally illuminated’.”
Ethiopia should issue international arrest warrants against UK officials!”

“Ethiopia as well as all African countries should issue international arrest warrants against British officials if they refuse to return everything their bloodthirsty colonizers pillaged,” said Rael.

Rael said the position of many museum administrators that such items should remain in Britain so the public can see them is unconscionable and just plain wrong.

“They don’t have the right to even open their mouths to argue it’s better for the public interest that these African artifacts stay in the U.K.,” he said. “It’s the fundamental right of the African people to have these items back, and to not display them at all if they so choose. Since these items belong to them, it’s also their right to do whatever they want with them. They shouldn’t have to explain such decisions to the descendants of the bloodthirsty colonizers. For the British to think they have the right to determine what will become of the returned items is proof that the colonizer mindset persists even today.”

Rael added that the museums now displaying the items owe considerable financial compensation to the true owners in Africa.

“They should have to pay huge monetary damages for their illicit use of these objects,” he said. “They’ve been cashing in on these treasures for years by charging entrance fees to see them. And the time to return them is long overdue. Therefore, in addition to the damages, an additional large financial penalty should be assessed for each additional day the objects aren’t returned.”

Ethiopia is one of the oldest countries in the world and has yielded some of humanity's oldest traces. The Ethiopian dynasty has a direct line of descent from King Salomon and the Bible version used in Ethiopia, called Kebra Negast, that dates back to the time of King Solomon and the Queen of Sheba, is of particular interest to Raelians since it contains clear descriptions of spacecrafts used by the gods, and of their occupants, Humanity’s creators, as described by the Raelian philosophy.