Ethical committees for politicians, not for scientists 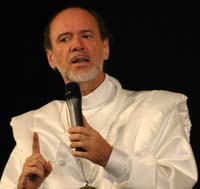 The UK is likely to order a new generation of nuclear weapons to replace the ageing Trident fleet at a cost of billions of pounds. The Defence secretary justified it by saying that, despite the fact the UK hasn’t got any enemies that it could possibly want to aim nuclear weapons at now, it might possibly have the right sort of enemy in 15 years time!
The Prophet Rael made the following statement today:
The UK and the USA can have as many more terrible and more dangerous nuclear weapons as they wish, but Iran, Korea and all the other countries can't...If it’s forbidden for some, it must be forbidden for all or there is a double standard. Demilitarization and denuclearization must be global or not. If not, some countries will use it to keep their colonialist and imperialist domination of the world.

It's so funny to see some "ethicists" of science saying that after Hiroshima bombing "they realize that scientists must have a sense of ethics"... There is no need for ethic in science. Ethics is anti-science and anti-progress. The only place where ethics and ethical committees are necessary is in politics and the military.
Not one scientist while discovering atomic energy was thinking that it will be used to kill people in Hiroshima and they all cried and say "what did they do with my work " talking about the politicians and militaries. There is an absolute need for ethical committees supervising what politicians and militaries do, not what scientific researchers do. Science must be 100 % free...the politicians and militaries must never be free as THEY are those who are responsible for misuse of science, crimes and genocides, not the scientists.