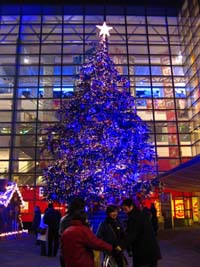 A group of Chinese students from elite universities have posted views on a website where they criticize what they call “Western cultural invasion" with the rise in Christmas revelry. They condemn the proliferation of Christmas trees, seasonal messages in the media and people celebrating on Christmas Eve.
People are now joining in Christmas partying without giving its meaning much thought, they said, urging for a return to Confucianism.
According to China Daily, it is unlikely that they receive much support since Christmas has been enthusiastically embraced by Chinese retailers and young people alike in recent years.
Rael has expressed his support to these students for resisting such a Western invasion.
In his support statement, he even went further, asking them to push China to adopt a non Christian calendar, as the actual Christian calendar is pure Christian imperialism. He asked them to push their government to ask the United Nations’ Organization to stop using the Christian calendar and adopt a new non-religious calendar that could be starting with the creation of UNO. It is unacceptable that China and the non-Christian countries of the world, who are a majority of 4.5 billion people, are forced to sign UN documents using a Christian calendar as there are only 1.5 billion Christians in the world, which is a minority. This is pure Christian imperialism.