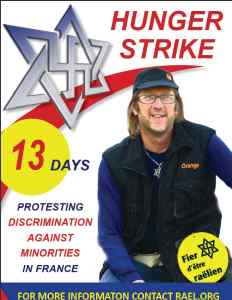 In a statement released on April 23rd, the International Raelian Movement announced a hunger strike by its national leader in France. The strike, now into its third day, was launched in front of the Moselle Prefecture on Thursday.

Kimbangu Mundele Piffer, technician for 32 years at FT / Orange (formerly France Telecom) said he had decided, as a last resort, to begin a hunger strike to protest discrimination against minorities in France, including Raelians. He cited 6 years of vain attempts to communicate with French administrative authorities and agencies of civil rights, including the Prefecture of Lorraine and HALDE.

“I tried everything with my employer, Halde, and with government agencies and even with the Elysee and the United Nations: correspondence, vigils, free hugs and complaints,” Piffer said. “But there was total disregard for those attempts. For six years I was an unwanted and despised citizen. The authorities will have to face up to their decision and either admit to the reason for their discrimination or watch me die, because I will not give up. The situation of the Raëlians I represent and of all religious minorities in general has become intolerable in France, and I see no other solution than to die to remind the French that human rights also apply to members of religious minorities.”

In 2005, Piffer was denied renewal of permits allowing him access to the EDF nuclear power plant of Cattenom in Lorraine, although he had previously worked in sensitive areas many times using his well-recognized professional skills. He immediately tried to learn the reasons for the non-renewal, taking multiple steps with the director and head of security at the plant, with the prefecture and with many other institutions, all to no avail. He is now convinced that he was evicted from Cattenom because of his membership in the Raelian Movement, which is a stigmatized religious minority in France.