Will there be another Helen Thomas to challenge religious minority persecutions?

Fear dictates the work of the journalists 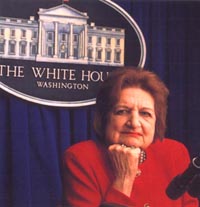 For almost five decades, Helen Thomas has been a White House reporter covering America's leaders with a pleasant dose of skepticism. She published a book last week called “Watchdogs of Democracy” where she describes her fellow reporters as becoming “complacent, complicit and gullible” and also as mainly “afraid of being considered “unpatriotic or un-American”. She also said that when it really mattered - when, in her opinion, the media could have perhaps prevented the invasion of Iraq - the press failed to do its public service by not challenging the association Iraq-9/11 that was so obviously wrong.

The Prophet Rael made the following comment regarding the fear of the journalists:

The same thing applies also to journalists covering the religious minorities called "cults" or "sects" ...especially in France. No journalists want to challenge the official listing in France of all Religious minorities as dangerous "sects"...
by a well-maintained fear of losing their job, by being accused to be a member of those they would defend. And the infamous list of "dangerous cults" made by the French government without any specialist involved, includes all religious minorities. There isn’t any religious minority listed as not dangerous; they are all dangerous, for the only reason that they think differently.
Scientology members, Jehovah witnesses or Raelians, they are all persecuted officially, and no journalist dare to challenge it while being officially proud to live in the country where the Human Rights were born ...Will there be a journalist courageous enough, like Helen Thomas, to challenge this official persecution ?