come to church to learn how to kill aliens 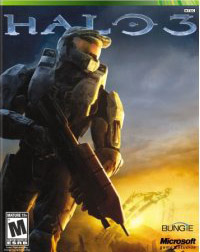 Some “Fundamentalist” churches in the US have been using the new and very popular Halo 3 video game in order to entice kids to come to church.
For those who don’t now this pop culture phenomenon, Halo 3 is the conclusion to an epic trilogy where the beloved protagonist Master Chief and his artificial intelligence sidekick Cortana struggle to save humankind from destruction at the hands of an alien coalition known as the Covenant. So what these Evangelists are saying to the kids is “ come to church to save the Earth by killing aliens from space”
Jane Dratz of the teen outreach mission Dare 2 Share, confirmed this tactic saying that the game can also used to stimulate debate. She wrote, "Halo is all about saving the galaxy from an invading force of aliens," "... Saving the world is Jesus' mission and message."
When learning of this, the Prophet Rael said “attracting teenagers to Christianity by offering to play a bloody video game in churches where the mission is to "kill in the name of Jesus" is a total betrayal of Jesus’ message of non violence which was: "love your enemies" and "if someone strikes you on the left cheek offer him your right cheek".
Not only Fundamentalist groups are behind the whole imaginary war on terror but they are now preparing the kids for the next illusory terrorist enemies who would be coming from space … with the infinite number of galaxies out there and the billions of civilizations - as confirmed by more and more scientists now-, they will not run out of potential enemies for a while …. But it would be such a nice break if Christians were finally following the teachings of Jesus! His message was one of love, compassion, accepting those who are different from ourselves… nothing like protecting the Earth from a potential enemy 
We especially liked the declaration of James Tonkowich, the president of the Institute on Religion and Democracy, who, after hearing of this new Fundamentalist recruitment tactic to draw young men to church premises, commented "If you want to connect with young teenage boys and drag them into church, free alcohol and pornographic movies would do it." …
I don’t think Jesus would object that… eh eh .

Two more points on the subject…
Just to make it clear, the messages given to Rael by our Creators clearly state that any civilization which could travel to our little blue planet out here in the boondocks of the galaxy would automatically be peaceful. If they were aggressive they would have destroyed themselves centuries ago if their high level of technology was not matched with a high level of wisdom and love – just like we are close to doing in this era of Earth’s progression. We have the technology. We just need the love or we disappear, that’s simple.
Also, second important point, Raelians love video games and have nothing against the violent video games. Rael explained that our Creators, the Elohim, even have very violent sports on Their planet in order to help release violent tendencies in some individuals… it could be their way to avoid wars? What about building an arena next to the White House? Or maybe make sure that the whole staff there play Halo 3 before going to the office so that they have released their violent urges... cool idea don’t you think?