a world currency is the solution 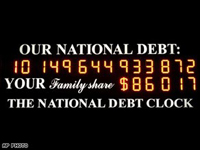 A news brief from today reads:
NEW YORK (AP) -- The National Debt Clock in New York City has run out of digits to record the growing figure. As a short-term fix, the digital dollar sign on the billboard-style clock near Times Square has been switched to a figure -- the "1" in $10 trillion.
It's marking the federal government's current debt at about $10.2 trillion.
The Durst Organization says it plans to update the sign next year by adding two digits.
That will make it capable of tracking debt up to a quadrillion dollars.
The late Manhattan real estate developer Seymour Durst put the sign up in 1989 to call attention to what was then a $2.7 trillion debt.

Rael commented:
“The truth is that the United States of America will never be legally able to get rid of such a debt and not even pay a fraction of the interests. This is the end of the world monetary system as we know it and a great opportunity for the instauration of a world currency. The process will be of course very painful, but will help humanity reach a new level toward the ‘planetarization’ of humanity. We are lucky to live these wonderful times which bring us closer to the ‘Elohimization’ predicted in ‘The Messages’.*
It is time to stop trusting the banks and the paper called money by governments printing it overnight without any real value. Don’t forget that there are much more dollars outside the US (some people say 10 times more) than inside the country and that if everybody sells it at the same time, it may lose as much as 90 % of its value.”

Rael uses the term ‘Elohimization’ which relates to the Elohim, the advanced scientists who created us and who contacted him 35 years ago, giving him what Raelians call ‘The Messages’ which is a compilation of information about how they created us and how they helped us grow in consciousness sending us Prophets like Bouddha, Mohamed for the most famous ones.
Most importantly, they explain that we are reaching a level of development in our society that will require making choices and they give us some directions telling us, as an example, that they don’t use money on their planet anymore and that we will soon reach a time where money will not be useful anymore…Before reaching that stage, we will need a world currency... Let’s see how the story unfolds. You can also see a short speech of Rael on the subject on the video called ‘Rael talks about money’.