‘Tis The Season to be Intolerant…fa la la la…”

happy Saturnalia to all 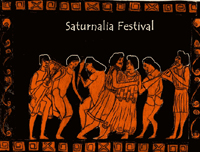 The Prophet Rael sent his support to a U.S. organization educates the public regarding the origin of the Christmas tradition in the U.S. – a country know for its deep religious beliefs – yet just as well known for its right to free speech. It’s an interesting place. :-)

In the US, there are countless signs promoting religion. And this time of year, there are millions of homes and even public buildings decorated for the Christmas holiday. There have been several court cases challenging the constitutionality of such decorations – including nativity scenes. You know statues of the baby Jesus, Mary, the 3 wise men, donkeys etc. which are supposed to depict the night of Jesus’ birth in Bethlehem.

Among the growing numbers of those insisting on equal time are a group of atheists known as The Freedom From Religion Foundation. They sponsored the following sign to be placed along side one such nativity scene in Washington State.

“At this season of WINTER SOLSTICE may reason prevail. There are no gods, no devils, no angels, no heaven or hell. There is only our natural world. Religion is but myth and superstition that hardens hearts and enslaves minds.”

It seems someone stole the sign and threw it in a ditch. Probably not an atheist. ;-)

U.S. Christians have been complaining more and more the past years that “people are taking Christmas away from us” because secularists and atheists are speaking up more and more and wanting equal time. The fact is, however, that the celebration of the winter solstice was going on for hundreds, maybe thousands of years before the early Christians hijacked the holiday. The Romans created the Saturnalia holiday from the winter solstice celebration – a week long celebration of giving, fun and craziness.
Eventually, Christians morphed the holiday into their own version, Christmas. This happened largely thanks to the Emperor Constantine’s decree that his Pagan kingdom would convert to Christianity. However, it’s not possible for the people of the time to simply forget the religious traditions they were raised with, so they naturally incorporated their traditions with the new official politically endorsed (and enforced) religion. Imagine the president of your country signed a bill stating that your country would officially become Pagan, or Buddhist for that matter. No matter what label the population is given, they will continue the traditions and beliefs they were raised with. It takes 2 or 3 generations to make the lane change and forget the past. The African slaves brought to the US are a good example of this. Not one of these slaves was Christian but within 2 generations their offspring were worshipping a god unknown to their grandparents simply because they were raised in a new, foreign environment.

The winter solstice celebration was widely celebrated by the Pagans until Constantine’s command. The Pagan religion still lives today though in much smaller numbers. In fact, this is where the Christmas tree and the use of Dec 25 as the date of choice, as other traditions which Christians believe belong exclusively to Christmas. (or Easter) Atheists and secularists are not stealing the holiday. It was Christianity which stole the holiday from the Pagans – Pagans who devoted themselves to living in harmony with nature as opposed to the Christian mindset which too often teaches that man should dominate nature. (“man shall have dominion over all animals…”)
No one is trying to take Christmas from Christians. Why should a sign promoting atheism be considered an attack? Why would Christians consider it an attack when secularists use their constitutional right to state their beliefs? We probably don’t need to say it because it is obvious.

Besides, most atheists and secularists atheists try to live every day in the spirit Christians live the few days of the Christmas season. By no means does Christianity have the monopoly on giving and loving. :-)

Tis the season to be intolerant…fa la la la…