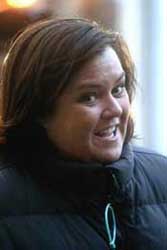 The Prophet Rael has just named Rosie O'Donnell as an honorary guide in the International Raelian Movement for her constant support of human rights, most recently supporting Canada's decision to recognize the rights of gays and condemning the US for ignoring human rights in denying marriage rights to gays and lesbians.

In a recent interview, Rael said: "I would be honored to perform the wedding ceremony for Miss O'Donnell and her partner myself!� Canadians are freer than even Americans now! She reflects the opinion of most people in the "free world" and probably even in the US - that the US is fundamentally built upon personal freedom and individuality and the Bush administration are wording things in a religiously rhetorical way in order to manipulate public opinion to redefine "family values", which goes against the purpose of the constitution - freedom. Maybe the administration is pandering to the religious right wing voters who were scared after 9-11 and looking for "security and comfort" through their religious beliefs. But the idea that a law can deny rights to some while granting the same rights to others certainly goes against human rights.

As for "family values", of course most people love their family - and that includes their gay son, lesbian sister, etc. So "family values" are really about love, not about denying human rights. I remember hearing that vice-president Cheney has a lesbian daughter. As a father, I am sure he still loves his little girl. But as a loyal Republican, he is not allowed to say much about it. Hopefully he would speak up when the laws take it to the next step: that being gay would be illegal and punishable by death (as was adultery, touching the skin of a pig and other such things in the Bible).

In the eyes of the world, it looks like the US is trying to introduce certain religious beliefs into the US laws thus creating a "theocracy" - the very thing the US condemns other nations for. If Mr. Bush is fighting for freedom as he now claims, (but we should remember that before it was because of WMD, terrorists in Iraq - they were in Saudi Arabia, not Iraq - and the other constantly evolving reasons) should it not also include sexual freedom between adults as well as a person being able to choose their own wife or husband, women being able to drive, go to school and other basic equal human rights which are denied in some countries?