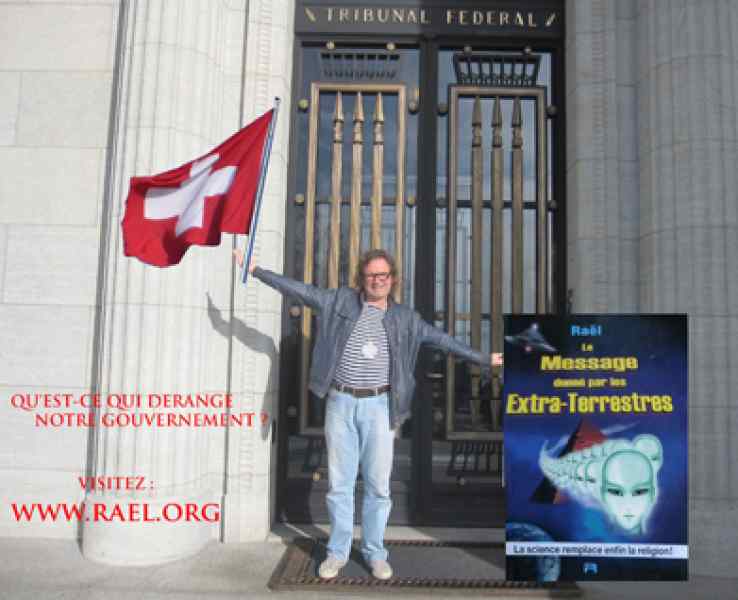 On March 29th 2001, the police department of Neuchatel refused to the Swiss Raelian movement the authorization to put posters from April 2th to April 13th 2001 on the public locations reserved for associations, on the ground that these “posters are threatening morals“. The poster, shown in the image here, simply depicted a few extraterrestrial faces, a pyramid and a UFO suggesting a link between today's UFO phenomenon and past civilizations which illustrates some of the background of the Raelian philosophy. Nothing immoral in there!
On April 22th 2005, the administrative tribunal of Neuchatel rejected the appeal from the movement. on the ground that the interdiction of these posters was necessary “in a democratic society for the protection of morals“.
On April 10th 2006, the movement filed a case with the ECHR arguing that the interdiction to display their posters was a violation of articles 9 and 10 of the Convention. On January 13th 2011, the ECHR ruled by 5 to 2 votes that there was no violation of article 10 of the Convention on the ground that the Swiss State benefits of a “margin of appreciation” about the use of its public space and the State has reasonable grounds to forbid the posters.
In their dissenting opinion Judges Rozakis and Vajic expressed that the movement was not forbidden in Switzerland and should be able to promote by posters its ideas and its non forbidden website.
Here is a summary of the statement of these 2 dissident judges, one of them being the President of the Court.
The concerned poster in itself doesn't show anything wrong or anything that could shock the public.”.”The Raelian association isn't forbidden and exists in Switzerland since 1977.” “An association is a legal entity which, when it functions in a legitimate manner in the society, has the possibility to spread freely its ideas and opinions in order to reach its objectives without obstacle, using the means that the society offers to all its members. The legal system of a state can refuse the creation of an association when it considers that it violates the moral, political or any other values of the society it represents. However from the moment that the state approves the goals of the association, one can assume that this association must be free to propagate the main ideas coming from the goals and objectives listed in its statutes to the society.
The Swiss Raelian Movement has naturally decided to bring the case to the High Chamber of the ECHR as it is an essential matter of principle. If the Raelian association is registered in Switzerland then it has the same rights and obligations as the any other association.

The other judges argued that the fact that a link to the Clonaid website could be found on the advertised rael.org website, and cloning being illegal in Switzerland, this is sufficient to refuse the posters. Well, if it is the case, let's examine the Christian, Jewish and Muslim philosophies. Anyone can open their scriptures and see that slavery, murder, child mutilation, obligation for women to be submissive, death sentence for homosexuals and a whole bunch of other horrible behaviors are taught as perfectly normal. Will the Swiss government keep on advertising these crimes by accepting their posters? What about the crucifix along the roads of Switzerland on public domain? Aren't they a clear advertizing tool of the criminal ideas of the Catholic church? Aren't they an insult for all the Swiss people who have been abused by local priests? An insult to all those who die from Aids following the pope recommendations? And an insult to all those who have been tortured in the past in the name of god...
If the ECHR follows this denial path and establish a jurisprudence with our case, we will have a lot of fun using this jurisprudence to clean up the European landscape of all this middle aged signs.
But let's have a look at what is bothering them in our philosophy.
They don't like our support for human cloning. Back in 2001 cloning was still a shock in the public mind but today it isn't anymore and many are thinking along the Raelians that it is the only way to become eternal and that allowing some parents to have a clone child if they are infertile doesn't seem like a big deal anymore.
They say that our philosophy could lead to pedophilia. Rael, our spiritual leader has repeatedly said that pedophilia is a mental disease and this can be found on all our sites. He also initiated the association called Nopedo to help the victims of Catholic Priests. Raelians are encouraged to have a free sexuality between consenting adults, why would they have pedophile tendencies? Only those who are denied a harmonious sexual life can have this mental disease developed and it is easy to find what philosophy counts the most pedophiles!
- They are concerned about the fact that we say that we need to elect only bright people. For the Raelians, to have intelligent people in charge is as obvious as choosing the best doctor when one is sick. Do you prefer to go to the local doctor assigned to you or would you rather choose the best known doctor? Would you like to keep being governed by those who had the most money to pay for his or her campaign or would you rather have someone who has a clear idea of where the world is heading and how to make it more harmonious and safer? Is it eugenics to wish for a bright leader? No, it is pure common sense...
- Finally they think that the slogan « Finally science replaces religion » could be offending. In the past, people were going to church and praying god to get better when they were ill. Today they go to hospital. Science does replace religion in many aspects of our life. Internet is the best religious experience as religion is the mean to link people and internet does that better than any local church. Is this offending? No it is simply our reality. Science replaces religion and for the atheists Raelians it is the best that can happen to our planet.
We will keep you posted on the results of our file at the ECHR as it is a major event for Human Rights lovers. Can a legitimate association advocating love and peace be denied basic expression rights by its government? Hopefully the next judges in charge of the file will contemplate the consequences of their decision before denying us our rights. But whatever they decide, the Raelians will rejoyce as if they win, Human Rights have gone a step further, if they don't win, they will have so much fun illustrating the incoherence of the situation.