The Prophet Mohammed was not perfect

and nobody is perfect, including the Elohim 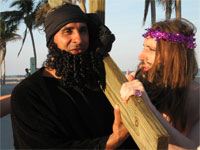 The Prophet Rael was asked a few questions regarding the life of the Prophet Mohammed who is recognized by the Raelians as one of the Messengers sent by our Creators the Elohim .

Question: Mohammed aknowledged Moses, Jesus etc., yet told everyone to not befriend Jews or Christians? Did he make a mistake when promoting what The Elohim taught him? Or were there re-translations which distorted his message from The Elohim?
Rael's answer: sadly both... Remember that nobody is perfect including the Elohim and of course their prophets...

Question: Thank You Beloved Prophet. Your reply leads to a blunt question; Since Mohammed promoted violence, why would he be allowed on The Planet of Eternals?

Rael's answer: In the Koran, when the hatred parts are removed, most other verses are very positive, teaching love and tolerance. That's what the moderate people want to focus on. And of course both Mohammed’s scriptures and life were, at about 99 %, a huge benefit and advancement for the population in this area. So I think the mistakes were forgiven in the final result check up or “last judgement”.

And we must also remember that many more mistakes were made by translators and scholars adding comments a long time after Mohammed's death. Like for Jesus... And Jesus was also, as all other prophets, human, so not perfect.... destroying the temple merchants’ shops even if it was philosophically right, was a violent act which was absolutely not in the "non-violent line" he should have kept......

I myself do some mistakes too... but I try to be as good as Buddha, who, to my knowledge, never made any big mistakes... Recently the Dalai Lama wrote in one of his books that he loves to feed little birds in his Indian residence, but that for one week he saw a hawk close to the feeding place killing many of them and was very angry; so he went to buy an air gun, and was in front of the hawk the next morning thinking : "Oh...I am a Buddhist monk and I am supposed to be absolutely non-violent and here I am with a gun to kill a hawk...." but he loved so much the little birds that he killed the hawk saying at the same time "sorry but I want to protect many non-violent birds from one who is very violent"...maybe it was a mistake... but I love this mistake and maybe would do the same...