The isRaeli Raelian Movement about to open a Rabbinical school

to welcome young ex-orthodox Jews and others 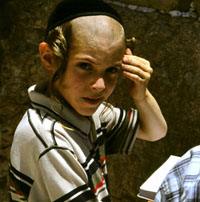 The isRaeli Raelian Movement has decided to open a Rabbinical school center where Raelian Guides will welcome all young ex-orthodox Jews who are thrown out from their homes or who are leaving them, after they have found the truth about our origins, thanks to our lectures.

In this school center, they will have the possibility to study and understand the real meaning of the Tanah (Bible) which never makes any reference to the ELOHIM as a single immaterial god, but to "those who come from the skies" as the term Elohim should literally be translated.

Through citations from the Tanah, the Zohar and other Hebrew texts, our lectures easily demonstrate that the ELOHIM mentioned in all Hebrew scriptures are EXTRA TERRESTRIALS who came to our planet thousands of years ago and created all life on earth as it was explained to Mashiah RAEL in his encounter with our Creators 32 years ago.

Leon Mellul Grand Rabbi of the Israeli Raelian Movement declared: " This explanation of our origin is much more in agreement with the scientific knowledge we have about life and the isRaeli young generation not only embraces the modern and revolutionary philosophy proposed by the Raelian Movement but they are also quite enthusiastic about its main goal which is to build an EMBASSY (the Third Temple) to welcome the scientists who created us in IsRael. They understand that the ONLY reason for the survival of the State of isRael is to welcome the Mashiah RAEL and help him build this EMBASSY. If isRael refuses, we will face once more a Diaspora and the end of the state of isRael."

Raelians in Israel are pleased to see more and more young ex-orthodox IsRaeli devoting time not only to study the new Bible but also to pave the way for Elohim's return in the promised land. The Raelian Rabbinic Center will provide them with help and support throughout their philosophical quest.