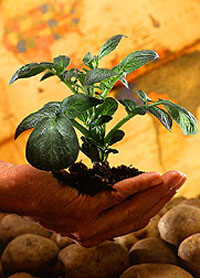 A new study published in AgBioForum, a peer reviewed journal on economics and biotechnology, done by Graham Brookes and Peter Barfoot, two UK-based economists has quantified the cumulative economic and environmental impacts of biotech crops grown during the past decade (1996-2005). They said biotech crops have contributed to significant environmental benefits from the reduction in overall usage of pesticides. They also noted a significant reduction in the amount of greenhouse gas emissions from biotech crop production.
They also reported that farmers who planted biotech crops realized significant economic gains compared to farmers who planted non-biotech crops.

A key finding of the study revealed that farmers used almost half a billion pounds (224 m kg.) less pesticides with genetically modified (GM) crops since 1996, a reduction of seven percent.
The global "environmental impact" of pesticide use has also been reduced by over 15 percent due to the planting of biotech crops.

At the same time, biotech crops made a significant contribution to reducing greenhouse gas emissions from agricultural practices by nine billion kg of carbon dioxide. "This is the equivalent of removing almost four million cars from the road for one year," the authors pointed out.

GM crops have also facilitated the use of reduced tillage or no tillage farming systems, which results in more plant residue being stored, or sequestered, in the soil. This carbon sequestration saved the equivalent of nine billion kilograms of carbon dioxide emission 2005, the study said.

The study also noted that since 1996, global farm income from biotech crops increased by a cumulative total of $27 billion from a combination of higher productivity and reduced costs.

Rael made the following comment after reading this study:
This is one of the biggest news of the year. The big question is why is it that major media do not talk about it, especially in anti-GM countries like France, and especially at this time when it is fashionable to talk about how to reduce the alleged global warming... It looks like GM crops farming is the most carbon dioxide reducing technology... GM companies should in fact get the Richard Branson money award! This news is a real big problem for anti-GM militants as GM crops prove to be very environmentally friendly...much more than normal agriculture as it was in fact forcasted...