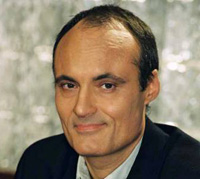 The Prophet Rael sent his support this week to the 12 writers who have put their names to a statement in French weekly newspaper Charlie Hebdo warning against Islamic "totalitarianism". He has expressed his wish to have his signature added to the list of 12 as he considers as very important to denounce totalitarian threat, wherever it is coming from, and in this case, it is from Islamism.

We reproduce here the text in full:

After having overcome fascism, Nazism, and Stalinism, the world now faces a new global totalitarian threat: Islamism.
We, writers, journalists, intellectuals, call for resistance to religious totalitarianism and for the promotion of freedom, equal opportunity and secular values for all.

Recent events, prompted by the publication of drawings of Muhammad in European newspapers, have revealed the necessity of the struggle for these universal values.

This struggle will not be won by arms, but in the ideological field.

It is not a clash of civilisations nor an antagonism between West and East that we are witnessing, but a global struggle that confronts democrats and theocrats.

Like all totalitarian ideologies, Islamism is nurtured by fear and frustration.

Preachers of hatred play on these feelings to build the forces with which they can impose a world where liberty is crushed and inequality reigns.

But we say this, loud and clear: nothing, not even despair, justifies choosing darness, totalitarianism and hatred.

Islamism is a reactionary ideology that kills equality, freedom and secularism wherever it is present.

Its victory can only lead to a world of injustice and domination: men over women, fundamentalists over others.

On the contrary, we must ensure access to universal rights for the oppressed or those discriminated against.

We reject the "cultural relativism" which implies an acceptance that men and women of Muslim culture are deprived of the right to equality, freedom and secularism in the name of the respect for certain cultures and traditions.

We refuse to renounce our critical spirit out of fear of being accused of "Islamophobia", a wretched concept that confuses criticism of Islam as a religion and stigmatisation of those who believe in it.

We defend the universality of the freedom of expression, so that a critical spirit can exist in every continent, towards each and every maltreatment and dogma.

We appeal to democrats and free spirits in every country that our century may be one of light and not dark.