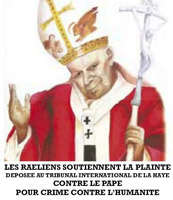 We will suggest to send them in the future to the real representative of our creators on earth. He will certainly get them back , and could expect a better blessing;-)
Our congratulations are also going to Borris Brandt, a TV producer in Germany who is launching a new reality TV show to find the man with the fastest sperm. The contestants, 12 men, will give their sperm that will be tested during the show to find out which one is the fastest, an indication of who is the most virile of them. The announcement of the show generated massive outrage from politically and ethically correct people. We send all our support to Borris Brandt for his wonderful idea that not only brings fun but also educates the public on basic science.