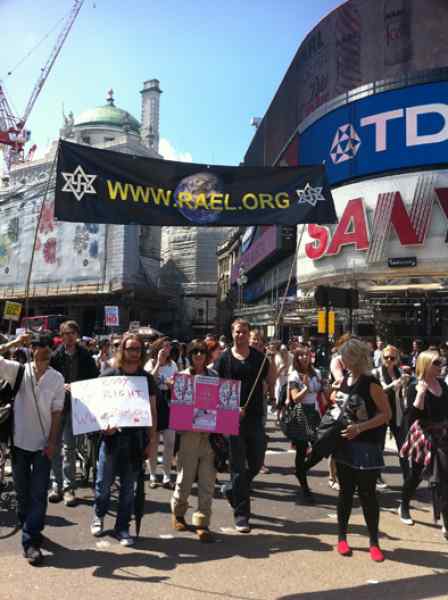 My name is Emma, I am a Raelian Guide in the UK and I am probably among the millions of women who have been raped and never reported it. When I read the raelscience (a free subscription in which you are sent all the latest scientific and political news) about a protest in the US named the Slut Walk I found myself wanting to have been part of it. The Slut Walk was created because on 24th January 2011 a representative of the Toronto Police gave shocking insight into the Force’s view of sexual assault by stating: “women should avoid dressing like sluts in order not to be victimized”.

As the city’s major protective service, the Toronto Police have perpetuated the myth and stereotype of ‘the slut’, and in doing so have failed us. With sexual assault already a significantly under-reported crime, survivors have now been given even less of a reason to go to the Police, for fear that they could be blamed. Being assaulted isn’t about what you wear; it’s not even about sex; but using a pejorative term to rationalize inexcusable behaviour creates an environment in which it’s okay to blame the victim.

Maitreya Rael was massively supportive of this new movement and after my own personal experience I was hoping that we in the UK might also have a chance to protest and support this amazing cause. To my delight I found out that it was due to take place on the 11th June so I set about putting the wheels in motion for us, The UK Raelian Movement to be there. Initially I was not sure how good the turn out would be but we were a happy group of 10 in the end, which I was very happy about. We met at Green Park station at 12.00 and once we were all present we made our way to the starting point outside The Hard Rock Cafe. This was a great opportunity for us to do some diffusing we had a number of people come and ask us about our symbol and what our philosophy was about so that was great. We always seem to find very passionate and strong minded people at these kinds of events so that also makes the conversations very interesting too. It took a while for the march to start I think we waited for about an hour an a half but it was nice to read all the other signs and to be in the thick of that action. When we got started things seemed to move quite smoothly and before we knew it we were in Trafalgar square.

I was so proud of the group, proud to be Raelian but also proud to not be scared to say this happened to me and to stand with others who had experienced this too.
With lots of love from our small Island
Emma