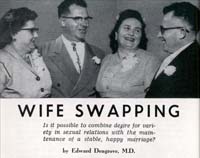 By the way, “wife swapping” is a term which would imply that it is the man who should decide to swap out his property, his wife. It’s definitely not so! This also comes from old traditions based in religious dogma which teaches that a man has some sort of dominion over a woman. Baloney! One of the women interviewed in Italy said something we really love. She said “I love my husband. That is why I want to swap him.” This is very much a part of the Raelian Philosophy. To love someone is, above all, to seek the happiness of those we claim to love. To be jealous or try to possess is the opposite of love. We love to see such liberated women – especially so close to the Catholic headquarters in Rome. :-)

And while it may sound strange, knowing what the “mediashit” journalists like to print about the “Raelian Sex Cult”, many, many Raelians choose to live a monogamous relationship with someone. While we know that no one can own another human being in any sense of the word, if partners choose to live together in a monogamous relationship, it’s beautiful – but no more beautiful than someone who wishes to have a new partner every week.