For his unconditional support of non-violence and respect of life 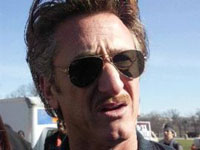 From the start, the actor and director Sean Penn has denounced the war organized by Bush and his sponsors in Afghanistan and Iraq. From the start, he has been asking for violence to stop!
On the 4th anniversary of the invasion of Iraq, he read a text that he also had printed in the Washington Post. We chose to reproduce it down here, for our pleasure. You will see similar words as the ones delivered by our Beloved Prophet over the past 4 years and more. For his support of absolute non-violence, for his respect for all lives, Rael has nominated him honorary Guide of Humanity.