Richard Branson does it again! 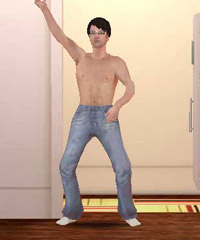 Rael and the entire Raelian Movement just sent Richard Branson our support for Virgin Mobile’s latest campaign which has already quickly donated over 15,000 articles of clothing to homeless youths. This campaign called for volunteers to strip in front of their cameras and post on YouTube. Virgin would donate a piece of clothing for every piece removed on camera. Brilliant! We love it!

The Prophet Rael is also currently sending a personal message to Richard Branson congratulating Branson for taking another step in helping rid the world of the current “nude phobia” which is strangling the world. There is nothing more natural than nudity. None of us were born with clothes on! Nope, not even the Pope.

Not surprisingly, Virgin just got a whole lot of flack for this campaign from conservative charitable organizations and churches for promoting “lewdness”. We wonder if they really thought this out thoroughly - because saying that the human body is lewd is a direct insult to the God they believe created us. It’s like saying “We love you God. We are ashamed of your creating us in your image. You have made us in your image – lewd”.

The Elohim, humanity’s true Creators who are indeed mentioned all throughout the bible (“God” does not exist in the original Hebrew text) explained to Rael in 1973 that when the book of Genesis said that “man was naked”, this was referring to mankind’s ignorance. It was a reference to a lack of knowledge, not a lack of clothing. How strange would it be for God to create human beings without clothing and then say that we're loathsome withou clothing?! This misinterpretation, which has been used for thousands of years to make people feel guilty, is responsible for so much unnecessary shame and guilt – and according to many psychologists, even the cause of a huge amount of violence since loathing nudity and sex leads to internal stress in the body and often even leads to violence since we are told by our bodies to enjoy sex yet told by clergy that sex is, in almost all cases, a “sin”.

The origins of this and many, many biblical scripture are clearly explained in the free download here, Intelligent Design.

In order to not lose customers, Virgin has already changed the campaign to something more acceptable to the conservative customer base. We think it would be great if the silent majority (you and your friends…heehee) would make as much noise about this as the “nude-o-phobics” are. :-) We invite you to write Virgin Mobile and support their original campaign. http://www.virginmobile.com/vm/contactUs.do Just type “supporting Strip2Clothe” in the subject box and let Branson’s company know there are millions of us who hope he will go back to the original plan. ;-)