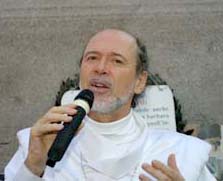 A few months ago, a bar owner refused to serve a beer to a raelian in Geneva, because he was raelian. He served everyone around but not Philip Chabloz, leader of the Swiss Raelian movement. The federal court ruled the case in favor of the bar tender and condemned Philip to pay SF4000 !!! Unbelievable!!! Rael , leader of the Raelian Movement asks the 65000 members of the Raelian Movement to protest in front of Swiss embassies and consulates to denounce the religious discrimination against the Swiss raelian.
He declared : « the recent decision of the Federal Court means that from now on, it is possible in Switzerland for any shop, hotel, restaurant, to refuse to serve raelians without fearing the law. Before, it was written at shop entrance « forbidden to Jews » or « forbidden to blacks », it is now possible to write « forbidden to raelians » with the consent of the Swiss authorities. On top of that, considering the fine of SF4000, it means that the raelian was wrong, like Jews and Black who were complaining before were wrong because of their difference. The Swiss raelians are now second zone citizens despite the fact that they pay their taxes like everybody else. This decision doesn’t even respect the constitution as it states that the raelian movement is not a religion and will stain worldwide the reputation of tolerance of the Helvet federation if it is not cancelled soon. Rael adds : « This is also against the constitution as there is a separation between state and church and a state cannot decide what organization is a religion or not. .The second pseudo reason given by the Federal court states that there was no serious psychological damage to consider after the refusal of a beer. This is monstruous and disgusting. Does that mean that only those who are deeply harmed by religious discrimination can file a suite, the others cannot say anything ? So if a Jew or a black person are not deeply psychologically affected they cannot go to a court and use the law against discrimination. This is unbelievable ! Hundreds of raelians will now live in the fear of being humiliated publically because some bar or restaurant may refuse to serve them and will of course go through terrible psychological suffering. If the Swiss governement doesn’t do any thing to correct that lack of justice immediately, the raelian movement will do everything to have the Swiss government condamned at the European Supreme Court. I ask all the raelians to protest publically against this discrimination, and not only the raelians but also all the Swiss citizens who love liberties and who would be chocked to know that bars in Geneva can have a sign saying « forbidden to raelians ».
Search Raelianews
News Categories
Other News
‹ ›