Rael’s views on the latest news 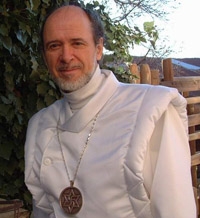 Israel- Rael has sent his congratulations to the newly elected Minister of Science and Technology, Raleb Majadele, who became the first Arab Muslim in Israel's cabinet. This historic appointment is well in line with what Rael suggested in his article “ Israel needs a Jewish Gandhi” published last Fall.
Arab citizens of Israel make up about 20% of Israel's estimated population of seven million. It is a pity to hear Esterina Tartman, chairman of Yisrael Beitenu, say that Mr Majadele's appointment was a "lethal blow to Zionism". In answer to that, Rael said: “this is racism and apartheid at its worst level”. Hopefully the “Gandhis” like Tali Fahima, new Honorary Guide, will soon out-number the ultra-nationalists.

US- Rael was also very pleased to see Representative Nancy Pelosi become the first female speaker of the US House of Representatives last week, as Democrats took control of both chambers of Congress.
He expressed his hope that she might help in his quest to have all parts of the religious books censored which do not respect human rights, especially those preaching discriminations between men and women; this applies to all monotheists "holly books", as Christians, Jews, and Muslims do not grant women the right to be priests and even more terrible, the Muslim Koran teach to physically abuse women!

He also expressed his support to elected representatives Keith Ellison, the first Muslim elected to the US Congress, who has used Quran once owned by Thomas Jefferson during his ceremonial swearing-in Thursday. He congratulated him for encouraging religious diversity in the USA and promoting the spirit of America founding fathers.

Venezuela- Rael has also sent his congratulations to Hugo Chavez, the newly re-inaugurated President of Venezuela who has declared that he wants to “nationalize the whole Venezuelan energy and electricity sector, all of it, absolutely all.' President Chavez also said "If someone wants to stay on as our partner, then the door is open but if he does not want to stay as our minority partner then hand me the field and goodbye".
Rael said that African countries should use Venezuela and its leader as models for what should be done in all African countries which are pillaged by occidental oil companies.


About death penalty- Rael was pleased to learn that Italy will campaign at the United Nations for a global ban on death penalty. The leader of the current centre-left coalition, Prime Minister Romano Prodi, has said no crime can justify one person killing another…. Fully in line with our philosophy!
As of today, 128 countries in the World have abolished death penalty, and this number is increasing. Although 64 countries still have death penalty as a legal possibility, only a few countries like China, USA, Iran and Saudi Arabia are actively practicing it.
The debate is heated on this subject in South Korea and the South Korean Raelians have issued a press release this week pressing their government to ban it. South Korea is now at the secretary-general level of the United Nations… let’s hope that they will not only review their own policy but also welcome Romano Prodi proposal…
Search Raelianews
News Categories
Other News
‹ ›