We hope for the age of love and compassion 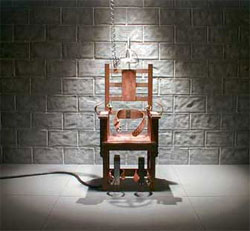 Our vision of the world doesn’t follow the Judeo-Christian standards. We believe that our destiny as an individual and as a humanity lies in our hands. Each one of us is responsible for what happens in his life and in our society as we don’t think any almighty god intervenes in anything we do and live. Scientists of another planet created us and gave us the necessary rules to survive. I will address one of these rules today, the absolute non-violence, as violence is unfortunately in our everyday news.

The Raelian Movement philosophy states that even if we are told that killing one person will save Humanity, we shouldn’t do it as if we start to justify one death, we can justify another one and then thousands of them and this not acceptable.

It is interesting to consider that statement following the 1000th execution in the US since 1976. The US Raelian Movement is issuing a plea to put an end, once and for all, to capital punishment. We are now asking that society re-thinks its values and definition of 'the sanctity of life as no man has the right to kill another man. To argue that the threat of being killed will curtail violent acts is pure illusion. And we should never, ever forget that there have been innocent people put to death! Even if this were the only reason, the death penalty must be abolished.

When you think of it, there is an obvious double standard in this 'Christian Nation.' The 10 commandments, which the right wing want to display so proudly in front of courts, clearly says 'Thou shalt not kill.' It doesn’t say 'thou shalt not kill unless…' The death penalty is nothing more than 'an eye for an eye' – something which Jesus was very clearly against.

A nation’s humanity can be judged by how it treats its weak, its old and its sick. Someone who commits a violent act is sick. To kill the sick is, in itself, sick. Education from birth is the key. The current system is a band-aid on a bullet hole and it will never fix the problem. We will one day be ashamed of this killing, just as we are now ashamed that we used to kill those who were supposedly 'possessed by demons,' those who had simple fits of hysteria, who were thought to be witches, – all of which, thanks to scientific understanding, were proven to be wrong and barbaric. Science will also solve our current problems.

It is also impossible to address this without addressing the topic of assisted suicide. The terminally ill are condemned to suffering the rest of their lives and not allowed to decide for themselves! Where is the humanity in this? Even suffering animals are put out of their misery. We call that ‘humane,’ yet we prolong the pain of human beings.

George Bush ran on a platform aimed at Christians while he signed more death warrants than probably any other governor. Is it any surprise he went out for revenge after 9-11, even invading a country which did not attack us?

Raelians hope that the age of ‘an eye for an eye’ will end soon and be replaced by the age of love and compassion.”