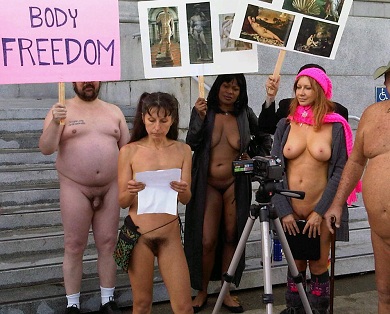 The city of San Francisco recently passed a ban on public nudity. Maitreya Rael commented on it saying: "It is a fundamental right for everybody to be naked wherever they want. We are all born nude."

Florence Laudoyer, Guide for the pacific region reports from the Bay area:

San Francisco may no longer be a city where anything goes, due to lawmakers recently approving a proposal to ban public nakedness, which means that enjoying a leisurely stroll 'au natural' in a city known for its liberal views and progressive lifestyle, may soon be a memory of the past!
And who best to lead such a campaign than a Wiener?? Oops..pardon my french :-)), I meant Scott Wiener (SF supervisor) who introduced the measure in response to growing complaints about a group of carefree people exercising their rights to be bare in the city's predominantly gay Castro District.
Under Wiener's ban, exemptions would be made for participants at permitted street fairs and parades.
The ordinance passed early December 2012, but it will not go into effect until February 1, 2013 to give a federal judge time to review it. The Castro nudists are suing because they assert that the ordinance violates what they call their constitutional right to be nude in public.

As Raelians and supporters of Gotopless, we had the opportunity to join this group of nudists to protest against the proposal of this ban, and we were able to make our voices heard in front of the city hall.

We also met with nudity activist Gypsy Taub, whose courage to address the SF board of Supervisors in the nude a few days before that drew quite a bit of media attention.

Raelians are standing up in defense of nudity since the proposed ban is a direct attack on our freedom of expression, our constitutional right as citizens to go nude, and no one should be denied that right.
It is also important to understand that those who claim that public nudity is psychologically detrimental to children don't know what they are talking about. The fact is that children exposed to social nudity grow up more aware and accepting of their bodies, and they learn to embrace themselves fully. In other words, they grow up to have significantly higher body self-acceptance and much less body image issues, but also a much higher acceptance of others and others' differences. Let's face it, clothing requirements make people unbalanced as it is very easy to use power over people while hiding behind layers of clothes. Think about it, we have the right to bare arms, but we don't have the right to go bare? It's arms that kill, not nudity!!
Just imagine our politicians meeting each other in the nude, how drastically different our planet would be governed, how different laws would be, would they be made by naked lawmakers. We are all on the same level in the nude, our natural state makes us more beautiful, more compassionate, more human, more humble...

Our fathers from space, the Elohim, have created us in the most beautiful way possible, for us to enjoy every part of our brain but also every inch of our body. Thanks to Maitreya Rael's teachings and the practice of Sensual Meditation, we are able to peel off layer upon layer of shame and guilt which may be keeping us from growing and blossoming as a human being.
So instead of creating more restrictive laws with the sole purpose of shackling people and giving up all individuality, let us honor the MASTERPIECE that WE ARE by challenging these laws...let us build a society with sustainable human values, in which universal Love and Respect will transcend, in which NUDITY will be celebrated in its most purest form :-)))
Search Raelianews
News Categories
Other News
‹ ›