Human rights should apply to all people 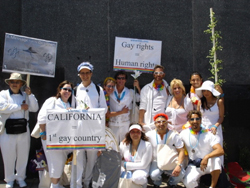 Thanks to a recently passed law recognizing same sex marriages, both Elton John and George Michael have announced that they will soon marry their respective longtime partners.
“It’s wonderful even though it’s a bit overdue! Any country which truly supports democracy (as opposed to theocracy) will show its true colors by the way it deals with this issue. Human rights should apply to all people, and not just heterosexuals. In fact, a society can be judged for its humanity by looking at the way it treats its minorities. Clearly, there is no more important minority than the individual.

We live in a society whose members are more worshippers of tradition than worshippers of any particular religion. Any religion which says that gays cannot marry is “playing God” in its judgments of what is allowed for people – and “playing God” is the very thing that religious leaders claim to cry out against when they try to debate stem cell research or human cloning.

Sexual orientation is genetic. One can observe homosexual dogs, elephants, mice, and penguins, as well as heterosexual or even asexual members of many species. Homophobia, however, is not genetic. It is a learned habit. We hope people can eventually realize this and treat each other as we would wish to be treated instead of the majority trying to dictate morality laws (based on the Bible, Torah or Koran) into any country which claims separation of church and State. Fundamental Christians say that Man has free will. We look forward to the day when people will stop passing laws banning gay marriage based on the assumption that only their lifestyle is acceptable.

Elton John and George Michael, we congratulate you for having the courage and integrity to stand proudly for your lifestyle, beliefs, and right to live them freely. All the best wishes to you and your respective partners."