To destroy the myth of god is our mission 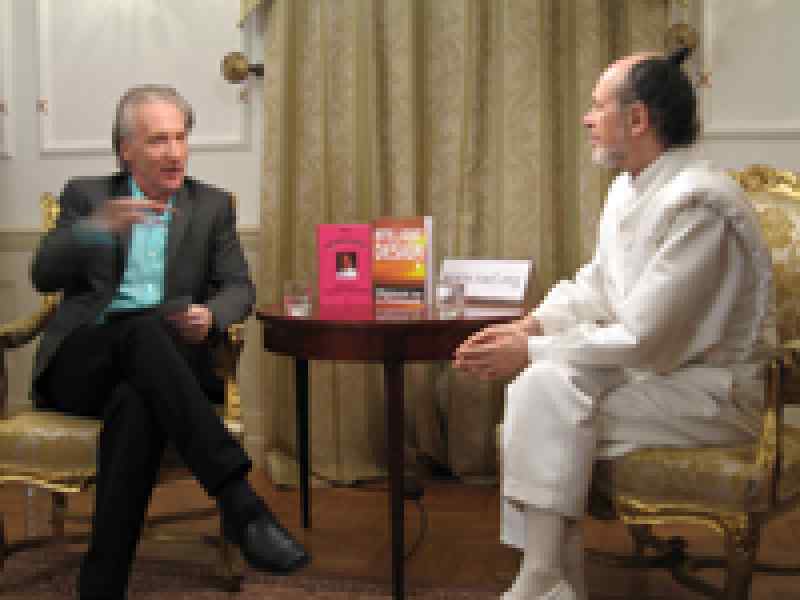 According to Variety, Lions Gate's "Religulous" - the much anticipated documentary directed by Larry Charles ("Borat") and starring Bill Maher, has had its release date moved from an early summer release to October 3rd 2008.
Rael, founder of the Raelian Movement was interviewed for the film back in January of 2007 and, no doubt when the final cut makes its way to the big-screen, the Prophet Rael will see his share of 'roasting' from Bill - who is known for his sharp wit and jokes about religion in general. So the Raelians will now have to wait a little longer before getting the opportunity to laugh not only at themselves, but at the 'God believers' as well, since one of the most important missions of the Raelians is to destroy the myth of God.
Despite the expected mockumentary style of the film, many Raelians, including Rael himself have a great appreciation for what Bill Maher does and look forward to seeing the film. Like Bill, Raelians do not believe in a supernatural God, and are highly rational people, the only difference being that while Bill may believe that we evolved from monkeys, Raelians are well aware of the mountain of evidence against evolution, and are also increasingly aware of how science is moving us toward the time when we as a humanity will populate another planet just as our human creators did a long time ago.

Rael expressed his pleasure to accept Bill's invitation to his show in Las Vegas last March. Putting their differences aside, during an after-show meeting, they found common ground in the view that the belief in one god is the main source of violence and crime on this planet. Like Bill, Rael has no hesitation to speak out against the Pope or other religious leaders. Just yesterday, he made the following statement regarding the Pope's view on sex as an addiction: “The belief in a supernatural and almighty God is a drug which is much more dangerous than sex. Sex doesn't create wars. Religions do. Millions of people were killed and tortured by these god-believers and it still exists in Muslim countries as well as Christian countries since the US is being exposed more and more for its torturing Muslim prisoners. The myth of god is THE most dangerous drug.”

The Raelian philosophy states that one should only be addicted to two things - happiness and non-violence. Surely Maher won’t crucify us for that. So if he makes fun of Rael’s attire or his description of the human scientists who created us or other aspects of our philosophy, we will take it in good humor.
With science moving at the rate it's going, time may well prove that Raelianism holds the most rational explanation for our origins. So check back with us often.