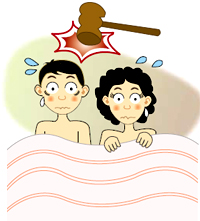 Every year 1200 people are indicted for adultery but almost none of them are sent to jail. It's time for a courageous Korean journalist to check how many among them were male Korean politicians, and if none of them were ever jailed, it's proof that not only does Korea disrespect the fundamental freedom of the people, but that it is a terribly macho and sexist country, jailing only women, while male politicians continue to have extra-marital affairs without risk. The women's associations of Korean should then organise a public protest against this terrible sexual discrimination and ask for the cancellation of the law or its application without any double standards for men .

Until the law is changed, young generations should protest against it, and the best way to do that is to not get married at all. Now, in modern countries like United states and Europe, more than 50 % of couples live together without being married, even those having children without any problem whatsoever. As 50% of marriages end in divorce, its also a big money-saver and a "de-dramatizer" of separations which can then be made in a friendly manner. If you are not married, then the anti-adultery laws do not apply - as it can only be enforced on married citizens! Even more important, as it keeps more respect between partners, unmarried couples stay together much longer than married couples as they do not feel trapped in the artificial social jail known as "marriage". So if you wish your love story to live longer : don't get married! Then you will also have the freedom, when the love story ends, to have other sexual partners without the risk of being sent to jail.