Rael says we all have genes from different races

for a better and more beautiful humanity 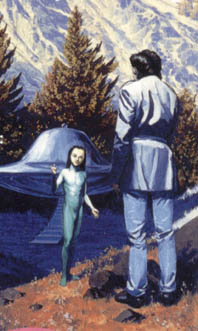 You may have heard a while ago about the fact that Jim Watson, Nobel Prize-winning scientist, lost it recently by claiming black Africans were less intelligent than whites. Although we like many of his statements, that racist claim is definitely not something that we would support!
Interestingly a study made on his DNA, - he published his fully sequenced genome online earlier this year- showed that 16 per cent of his genes were likely to have come from a black ancestor of African descent. By contrast, most people of European descent would have no more than 1 per cent. The test also indicated that a further 9 per cent were likely to have come from an ancestor of Asian descent…. This is for sure an interesting twist for a racist individual. His 16% show that he probably had a great-grandparent who was African.
Rael made the following comment:
“whoops...sometimes even geniuses say stupid things.... This is a great proof that we all have genes from multiple races, each of them bringing positive things in the future humanity which will be the fruit of numerous racial mixes. That's why children of multiracial couples are always more beautiful and more intelligent. While children from tribes who don't mix their genes with others have many health problems. Like the huge percentage of colon cancers and myopia amongst orthodox Jews families. The Inuits, native Americans, and many other tribes had the wisdom to offer their wives for one night to visitors as they knew their children will be in better health, more intelligent and more beautiful. Doing that, they also were improving the global health of their whole community. In fact it's a great punishment for racists to see their descent genetically handicapped. It's a kind of natural reward for non-racist people and cultures.”

Rael has explained in his book “Intelligent Design” that the scientists who created us in many races anticipated that we would one day reach a stage where we wouldn’t be able to see differences between races anymore as they will all have blended completely just like it happened on their planet. These races were conceived so that the ultimate human race would be beautiful and intelligent...