In French-speaking countries of Europe and Muslim countries 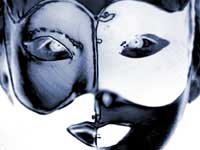 Through the ages, religious minorities have had to act in secret in order to protect their members.
The first Christians used to meet in the catacombs to avoid being thrown to the lions, Protestants had their masses in caves and the Russian Orthodox were doing the same when the Communist government was denying them the right to exist.
Considering the discriminations that religious minorities have to face in the French speaking countries of Europe, because of the anti-sect movements at the service of the Catholic Church which is trying to keep what is left of its power, as well as in most of the Muslim countries, Rael has decided to offer for the first time, the possibility to become Raelian for those who live in these countries and who want to live their faith without having to express it publicly.
So if you feel Raelian but you are afraid of loosing your friends, afraid of how your family will react, or even afraid of loosing your job if you join us, and if you live in one the countries mentioned above, you can become a secret member of the Raelian Movement.
You will be able to do your Cellular Plan Transmission in secret and, anonymously, only one Guide will hear your name in the room where you will be alone with him when he will do your transmission, in a secret place.
You will also be able to meet Rael in secret.
You will receive the newsletters of the Raelian Movement in a discrete envelope.
You may also give anonymously money to help the Raelian Movement and Rael.
You will also be able to attend private seminars that will be reserved to secret members only, wearing a mask or not.
It remains important that as many new members as possible join the structures of the Raelian Movement and, in doing so, become publicly active Raelians. However, with his huge compassion and love for Humanity, Rael wants to offer this possibility to become Raelian in secret for those who are not ready to get public, in the French speaking countries of Europe and in the Muslim countries.
Then, when the Elohim arrive, you will be able to say that you have been helping the last of their Prophets, as a secret member and there is no doubt that it will help you to gain eternal life. In this way, you can feel good being among those who help the last Prophet, even if your involvement isn’t public.

If you decide to become a secret member of the Raelian Movement, you may contact us at @. You will then be told how to do your transmission (baptism) and how to meet Rael, all this absolutely in secret.