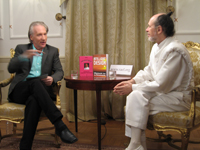 “Thanks to science, humanity now realizes at last that all such absurdities were imposed by primitive religions, with the help of governments that used them to have greater control over the population. They were also used as a pretext for pillaging the world during the colonization era, under the guise of ‘spreading the true faith.’

Due to scientific advances, Rael said, humanity now realizes that the universe is infinite, and that we can cure all diseases – which are natural phenomena, not the punishment of some sadistic god. “Even death will be suppressed, thanks to cloning,” he said.

He said people now realize that women are equal to men and that they have the right to decide whether they want to have a baby or not.

“Thanks to contraception and abortion, they know that a baby – even the pope – is not ‘a gift from god’ but the fruit of the meeting between a sperm and an ovum,” Rael said. “And people also know that gay people are not ‘sinners,’ since homosexuality is genetic, and that there is no such thing as original sin. The concept of everyone being born guilty – even before doing anything – was used to spread guilt, in the name of ‘a god of love.’

Rael pointed out that people today know that sex is good, that it’s the most natural pleasure, and that it can be enjoyed freely without deciding to create a child.

“It’s to be expected that the new humanity, freed from superstitions, is staying far away from churches and temples and visiting sex shops and swingers clubs instead,” Rael said. “That’s why European churches are empty, and it’s why there are no new priests to replace the old ones. The purpose of life is to be happy, spread love, happiness and peace. That purpose can be achieved much more successfully without the concept of a god. The church is dead, but not god, for he was never alive in the first place. He never existed!”