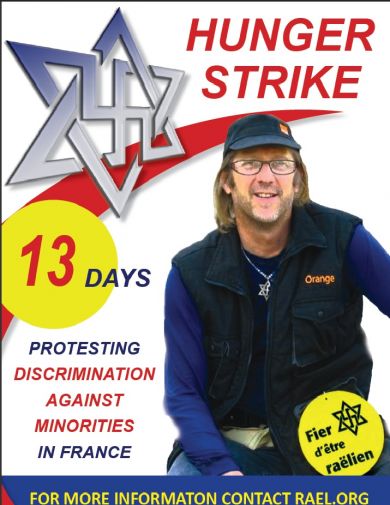 The US Raelian team has been organizing protests this week in front of the French embassy in Washington DC and French consulates in New York City, Chicago and Boston supporting the leader of the Raelian Movement in France who is doing a hunger strike protesting discrimination against religious minorities in France.
See here for the complete story:
http://raelianews.org/news.php?extend.427

Here is what Upendra tells us after protesting in front of the French embassy in Washington DC today:

I got to the French embassy around 11:30am with my poster, and stood right in front of the gate for a while. People were coming in and going out, reading my poster. The guard then showed up and asked me what I was trying to do. I told him that I was protesting for a humanitarian cause and wanted to hand a letter to the ambassador. He said that the only way I could send a letter was through mail, or make an appointment to meet the ambassador. I told him, in that case, I would like to make an appointment. He said that I should call the front office. I asked him for the phone number, and he said that he is not allowed to give me the number. I said, well no problem, I have a smart phone so I can get the number myself. He then said that I was standing in French property, so I should move to the closest bus station, which was public property, or else the secret service would come to get me out! I said I OK, but only backed away two steps. The guard left.

Hmm...it seemed like I was going to be protesting without being able to deliver the letter...not exactly how I wanted it to be. I wasn't quite sure what to do. So, I called the front office as I stood there with the poster. I told the staff over the phone the story of our brother Kimbangu Piffer, and all I wanted to do was deliver a letter to the ambassador. She said that the only way to send the letter was via mail. I said OK and hung up. I stood there again with the poster, not knowing what to do. I called the front desk again, and told the staff that I wanted to make an appointment this afternoon with the ambassador. She said that I would have to fax an application, and it wouldn't be possible for me to get one anytime soon. I said OK, thank you, and hung up. Again, I stood there not knowing what to do. I called her again and said - "Listen, this is a serious humanitarian issue. Someone's life is at stake. All I am saying is that this letter be delivered to the ambassador." She said that she could not help me, and hung up. Hmmm...well, I just stood there with the poster.... 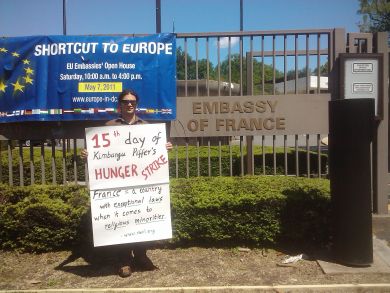 Then a woman with a baby in a stroller came towards the gate. She wanted to get in the embassy but the door was so heavy she could not push it. So I decided to help her, and pushed the gate for her...oh, oh...now this really got me into the 'French' property. The woman was grateful, but this really annoyed the guard. He thought I was trying to get in. I told the guard everything was OK, and I was only trying to help the woman with the baby.

I stepped back from the gate and stood there with the poster. Few minutes later, an officer from the embassy showed up and approached me. She said that I could not stand in their property, and had to go across the street. I told that I would do so, but asked her why they were turning a blind eye to my protest. She asked me what this protest was about, and wrote down everything that was written on my poster. She also asked about the Raelians. I gave her the whole story. When I asked her if I could hand the letter to the ambassador, she said he is too busy and that I would have to mail the letter. Enough was enough. I told her "If your ambassador is too busy when someone's like is at stake, what does that say about your ambassador, and your government?" Finally, without hesitation, she said that she would hand the letter to the ambassador. I handed her the letter, and thanked her.

I made my way home, feeling quite happy ! =) My love goes to our brother Kimbangu, and our beloved Maitreya for the wonderful opportunity to be a part of a Movement that is overflowing with love and consciousness.