Prophet Rael with Raelians in Miami

We are one "human body Humanity" 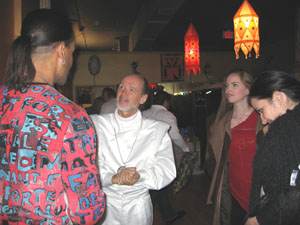 Two weeks ago at a Sunday monthly gathering in Miami, the Prophet Rael met with the local members and spent an hour with them after meditation.
Here is what he told them, taken from notes…. You can also listen to him on www.raelradio.net

"I hope this meditation helped you to feel as one as there are no borders between your legs and your sex, between your arms and your torso. The Humanity is like a human body and they are trying to separate its arm from its body… “Let’s destroy the right foot, let’s send an atomic bomb on the sex”. If a human being was doing that to himself, he would be declared insane.
In the universe there are an infinite number of intelligent civilizations on planets like ours. Looking from the sky, there are no borders. We have to destroy the separations. We are one “human body humanity”.
They don’t visit us often and there is a reason.
Imagine that you live in a harmonious place that could be America for example and there is a state full of violence, let’s say it is Afghanistan. Will you go and visit Afghanistan? The other advanced civilizations of the universe see us as Americans see Afghanistan.

They wear the burka in Afghanistan and American women don’t want to go there. In America, we don’t have the burka, but we have Bush.
Americans have been killing thousands of people in Hiroshima, in Iraq… In my last text, I said that we have to protect our Western civilization, but to protect is not to attack. Like the Elohim don’t invade us, they trust that we will slowly get rid of our Bushes. We are so primitive, including me.
Mohammed was so primitive. He married a 9 year old girl and had sex with her right away. This is what we call pedophilia today. He attacked caravans, he was really primitive. He brought good things also as people were eating each other then and he stopped that.
I am primitive too.
In America, there are still people praying for rain or for curing people, they have horoscopes …. So primitive! Even the best scientists are primitive. They think that we had a monkey as an ancestor.
The Elohim could arrive here right now. People would say it’s a miracle. This is why they don’t want to come.
Our thoughts, our beliefs, our actions are electrochemical reactions in our brain.
The first step of consciousness is humility. We are nothing but dust. We look at plants, animals, at the Earth, we are so small. But at the same time we embrace the whole universe.
Some people are born brainless because of genetic defects. You cannot expect anything from them. Some look normal but have also brain defects and make terrible decisions. We should be worried about these normal-looking people…

When people have the power to kill, we must make sure that they have the right brain, like for the Hamas or Bush who have been elected democratically. Some people are dangerous and it is possible to measure it in their brain. We should give a license to be elected, to reach the power to decide. That’s geniocracy.

Only love can help Humanity, and love is the best sign of intelligence. We have to make sure that intelligence is in the brain of the leaders.
There should be “intelligence schools” where people are taught to think and not believe.

If we disappear, it’s healthy. If the Humanity disappears, we shouldn’t be sad as we shouldn’t spread in the universe the Hamas’s things and the Bush’s thing. We must focus on spreading love, not on survival- we must try to survive to bring love. We do our best to give love but we don’t despair if we don’t survive.

The first thing is not to save humanity because it is mission impossible, but to save a few people, individuals like you who can be saved by the Elohim. It is what I do, it is my mission.”

He then accepted to answer a few questions from the audience and they will be available in a few days on our radio.

Here are a few excerpts of his answers:
“When you hate, you poison yourself, you become sick, your body shortens its life. Stop hating for yourself. You should say “I love myself too much to hate anybody”.”

“There is a worldwide plot to keep people in fear. Our ambition is to save the world from fear”