The highest effect of a trained consciousness is the ability to stop reacting to external stimuli. 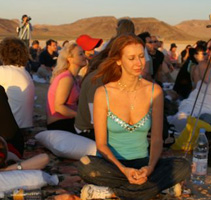 Australian scientists from The University of Queensland have been studying the effects of meditation on brains and how it can change behaviors. For their study, they were given access to 76 Tibetan Buddhist monks who had between 4 and 54 years of meditation training. Among other tests, they gave the Buddhist monks vision tests, where each eye was concurrently shown a different image. While most people's attention would automatically fluctuate between the two images, they were amazed to see that the monks were able to focus on just one image.
(on the picture above, a group of raelians practicing meditation in the desert near Las Vegas)


This news item is from Raelianews
https://raelnews.org/the-highest-effect-of-a-trained-consciousness-is-the-ability-to-stop-reacting-to-external-stimuli..html