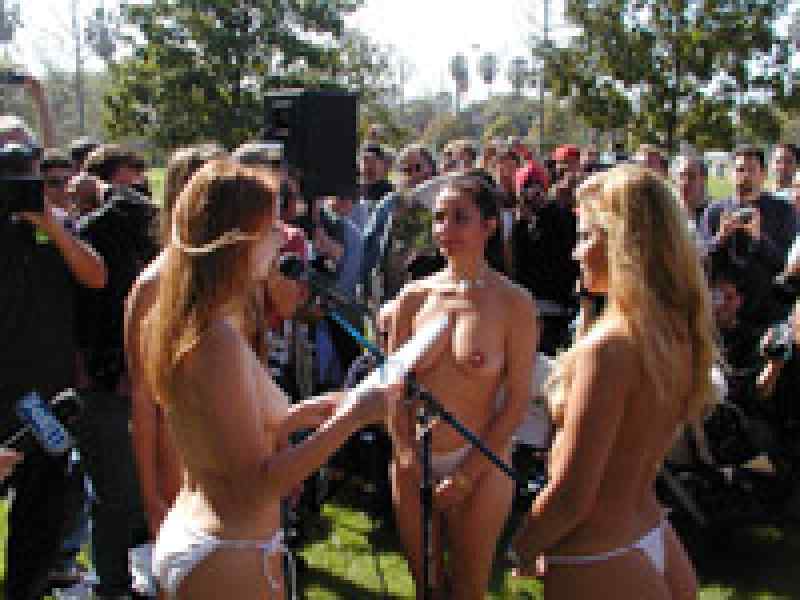 "As long as men can go topless, women should have a same and equal right," said Rael, spiritual leader of the International Raelian Movement and founder of GoTopless.org. "Otherwise, men should also be forced to wear something that hides their chests."

Women should go topless and rally publicly in great numbers on August 23 to protest that despicable treatment and exercise their rights. “All women are encouraged to join us at these rallies with their peaceful femininity and unshakable determination, in order to protest this gross inequality in the law” says Nadine Gary, who leads the movement – on the picture during a disrobing ceremony with a few friends in LA 2 years ago.
The women of gotopless.org demand that the right to go topless for women be recognized in accordance with the 14th Amendment of the U.S. Constitution, and that all state laws be amended to reflect that right."

The Aug. 23 rallies will be held in a number of U.S. cities, including Washington, Los Angeles, Miami and New York. The New York City rally will be important even though it has been legal for women to go topless in public in New York since 1992. However, it will remind the women there to feel free and naturally exercise this fundamental right just as NY men do. This fundamental freedom permitted by the laws of their state that is still widely ignored by many. One way to update the public is to be part of National Protest Day.

This news item is from Raelianews
https://raelnews.org/raelian-movement-declares-aug.-23-national-topless-protest-day.html