Top Official calls for Engaging and Talking to one's Enemy

the only solution, says Rael 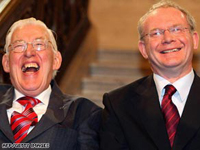 One of the top policemen in Britain told the nation’s media today that the only way to end terrorism is to "talking and engaging" with one’s enemy. He should know – his name is Sir Hugh Orde and he was the first head of the police force in Northern Ireland to facilitate negotiations between Ian Paisley and Martin McGuinness, the respective leaders of two enemy organizations in Ireland who were engaged in one of the most violent struggles in recent history which lasted over 30 years.

Among other things, Orde pointed out that there has never been a single terrorism campaign in history that had ended without negotiation.

The Prophet Rael responded emphatically: “Of course he is 100 % right! Only understanding the "enemy" and negotiating with love can bring worldwide peace - because behind any "enemy" there is a human being with the need to be understood and respected. So many unnecessary deaths and suffering would have been avoided if all the world’s leaders could have had the same wisdom. No military power, no matter how powerful, can replace love and understanding. If only Bush and Blair could have understood this, so many innocent lives could have been spared.”

Thanks to Orde’s spearhead mission, a peaceful end was realized and the 2 former enemies see picture above) even served in government together and have become friends. :-)))


This news item is from Raelianews
https://raelnews.org/top-official-calls-for-engaging-and-talking-to-ones-enemy.html