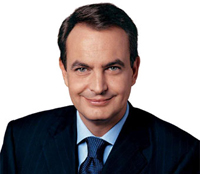 Zapatero, who won a second term in March, now has more female than male ministers in his cabinet, and there is a new ministry of gender equality. Moreover, Defense Minister Carme Chacon is seven months pregnant.

The prime minister says he is both pro-feminist and anti-macho, and his actions prove it.

"With the exception of Scandinavia, Spain’s is the only modern democratic administration to take so many steps tackling gender issues,” Princess Loona said. “Women have the same capacities as men. Therefore, all posts, whether for government or business, must be occupied by those best suited for the job, regardless of sex."

Women's salaries in Spain are 30 percent lower on average than those of their male counterparts, and top posts on large company boards there are still occupied by males. But Zapatero has implemented new laws: 40 percent of all political candidates up for election must be female, and the same requirement will soon be applied to boards of companies bidding for government contracts.

This news item is from Raelianews
https://raelnews.org/spanish-raelian-movement-supports-zapateros-female-majority-cabinet.html