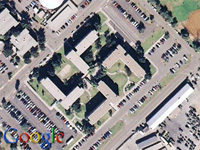 Confusion about the swastika, an ancient symbol of good will co-opted by history’s most infamous dictatorship, is at an all-time high.
In the United Kingdom earlier this month, the clothing shop Zara yielded to complaints by removing a line of handbags whose design included a swastika. Days later, the U.S. Navy announced that a barracks complex at its Coronado Island base in Southern California will undergo more than half a million dollars in renovations because it resembles a swastika from the air. After aerial images on Google Earth revealed the pattern, Internet forums buzzed with conspiracy theories and heated discussions about the resemblance. An Anti-Defamation League representative asked the Navy to make changes to the complex, and the Navy agreed.
“There is a great deal of misinformation and misunderstanding in the West about this beautiful symbol that was so brutally tarnished by the Nazi regime,” Rael said in a Sept. 28 statement. “Hitler stole the swastika and dragged it through history’s dung heap, but to tens of millions of people around the world, it was – and still is – a symbol of peace and good will. In Sanskrit, it means "well being" or "cycle of life". In Hinduism, Buddhism and Jainism, it is a symbol of well being that is often used for meditation. In fact, it’s used in temples worldwide.”
Rael called upon U.S. citizens to protest. “This is a senseless, politically correct decision,” he said.


This news item is from Raelianews
https://raelnews.org/rael-asks-americans-to-oppose-costly-makeover-of-swastikashaped-barracks.html