Our Continued Support for "Dr Death"

People have the right to choose to die when they suffer 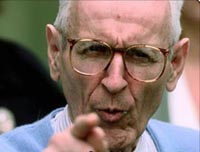 As many of you have seen, Dr. Kevorkian is being released from prison after serving 8 years of the 10 to 25 year sentence for assisting the suicide of a terminally ill man.

The Raelian Movement sends our continued support to Dr. Kevorkian for his “kicking the door open” and forcing the public to address the issue of assisted suicide. We know what it’s like to force people to talk about uncomfortable things. The Prophet Rael has been doing this for decades. Many subjects were taboo until Rael forced them into the public arenas - like human cloning, stem cell therapy, handing out condoms in schools, supporting genetically modified crops, there is no god, no such thing as evolution - just to name a few.

We find it amazing that politicians, under pressure from religious leaders and followers, contradict themselves by being against a terminally ill patient committing suicide while they are, somehow at the same time, supporting capital punishment. Theirs is a mindset which forbids someone who is suffering beyond comprehension to choose to end their own life yet they condone the calculated murder of a criminal (who are only suffering from a disease) as well as being OK with “collateral damage” in Iraq, where almost 1,000,000 innocent children have died thanks to sanctions and the subsequent illegal occupation.

This news item is from Raelianews
https://raelnews.org/our-continued-support-for-dr-death.html