There is nothing to hide 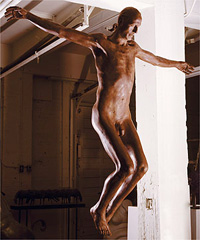 Rael has expressed his support to two artists who disturbed… the sculptor Cosimo Cavallaro who was supposed to expose at the beginning of April, during Easter week, a chocolate statue of Jesus, in the gallery of a hotel in Manhattan.
The local Catholic bishop didn’t like it and his pressure on the hotel was such that the exposition was banned before it even opened. The reason for such an anger wasn’t because he was afraid people would prefer to eat the chocolate Jesus instead of his “tasteless” bread Jesus. No No, the reason of his big drama was the fact that Jesus was represented as he was on the cross, that is to say, fully naked ! What is funny is that all American media showed only a representation of the statue from the back. It is only by finding the picture showing the front part, in a New Zealand newspaper, that I realized why he was so shocked… Glad to see that New Zealand media are comfortable with the fact that Jesus had a penis :-) We thought we should share it with you as our way to state once more that we shouldn't have any taboo regarding our body, our sexual organs, and that Jesus was a human being and never condemned sex... Why would he condemn any part of the creation?
The Raelian philosophy clearly states that we have been created to fully enjoy life and thus blossom and create passionately, using any one of our senses to give the full extent of our creativity.

This news item is from Raelianews
https://raelnews.org/chocolate-jesus-deserves-a-place.html