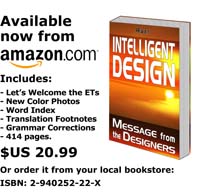 I couldn't resist to share this article published on The Guardian a few days ago... Our Congratulations to Richard Buggs!

If Darwinists distinguished between science and their religious beliefs, we'd all be wiser, says Richard Buggs

'It is true that complex things in nature look as if they have been designed. Darwin knew this. But the sublime truth about his theory is that it explains how complex things can come about without design." That was James Randerson arguing that Darwin refuted intelligent design - which, he says, has no place in school science ( Here endeth the lesson, December 13).

Darwin made a massive contribution to science, and his ideas still suggest hypotheses today. These provide the starting point for my own research, published in journals of evolution. But despite the brilliance of Darwin's work, it is overoptimistic to claim that his theory explains the origin of all living things.

If Darwin had known what we now know about molecular biology - gigabytes of coded information in DNA, cells rife with tiny machines, the highly specific structures of certain proteins - would he have found his own theory convincing? Randerson thinks that natural selection works fine to explain the origin of molecular machines. But the fact is that we are still unable even to guess Darwinian pathways for the origin of most complex biological structures.

Science has turned lots of corners since Darwin, and many of them have thrown up data quite unpredicted by his theory. Who, on Darwinian premises, would have expected that the patterns of distribution and abundance of species in tropical rainforests could be modelled without taking local adaptation into account? Or that whenever we sequence a new genome we find unique genes, unlike any found in other species? Or that bacteria gain pathogenicity (the ability to cause disease) by losing genes?

But, whatever the limitations of Darwinism, isn't the intelligent design alternative an "intellectual dead end"?


This news item is from Raelianews
https://raelnews.org/intelligent-design-is-a-science%2C-not-a-faith.html